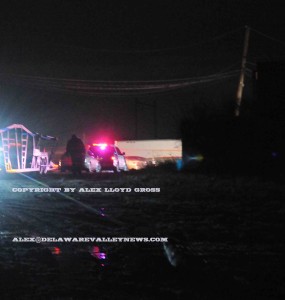 Bensalem police are trying to find a gunman that fired at least one shot from a handgun at an industrial complex on state Road just before 6:30 PM today, January 26, 2016.  The victim was shot once in the chest . His injury is being called “critical”.  The incident happened in the parking lot of  Philadelphia Express Group.   Reports were  the gunman fled in a late model Mercedes.

The victim has not told cops the identity of the gunman.  Police do not know if this is a workplace violence or a domestic shooting, or something else.  The shooting happened in the parking of a building. The location of the crime scene suggests this was not a random event. Anyone with specific information on the shooter is asked to call (215) 633-3719.  The victim is  a male , 46 years old. His identity has not been released yet.  He was rushed to Aria Hospital, Torresdale Division for surgery.