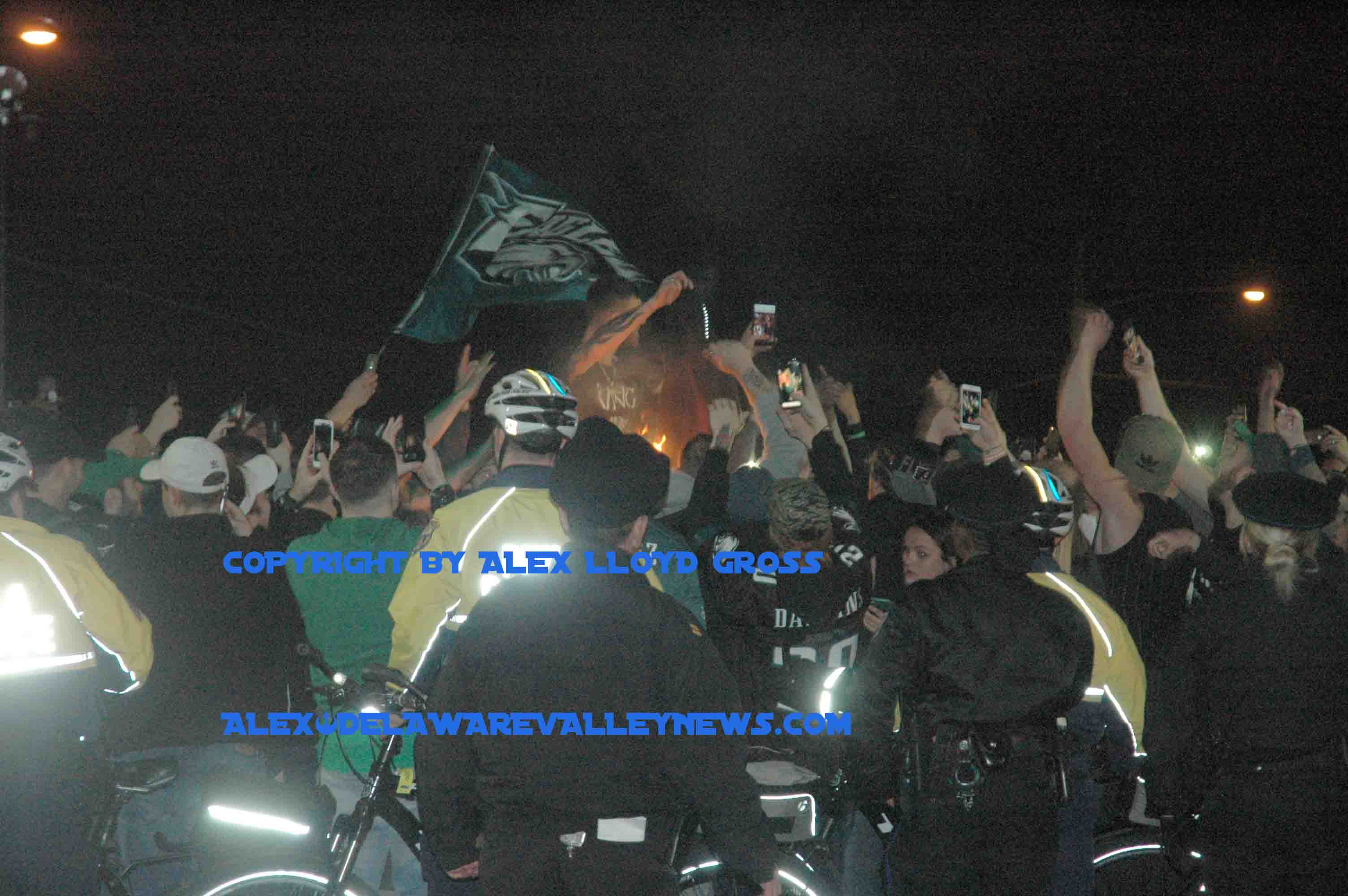 Alex Lloyd Gross -Photo Delaware Valley News.com The scene at Cottman and Frankford as cops push the crowd back. One male is lighting a Tom Brady Jersey on fire. 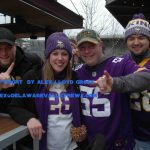 Alex Lloyd Gross Photo- Delaware Valley News.com Vikings fans were all smiles before the game at Xfinity Live. After the game, not so much.

The Philadelphia eagles are going to the Super Bowl.  They trounced the Minnisota Vikings 38 to 7.  After the Vikings marched into the end zone during the first quarter, things did not look great for the Eagles. However, they came back and scored in every quarter. Expect for the Vikings drive early in the game, that was the only score they got. As the clock came down to zero, thousands of fans poured into city streets to celebrate.  Key intersections like Cottman and Frankford were a madhouse.

Huge sanitation trucks were pre staged to close off the road to traffic. As the sports bars along Frankford Avenue let out,  the crowd spilled into the streets. People came from their houses.  It was a celebration not seen since 2005, when the team went to the Superbowl. Most of these fans were drunk. As tailgaters  gathered around the Linc at noon, others made their was to Xfinity Live. There, these people  paid a $10.00 cover to hang inside or outside. Eat drink and drink some more. Those that did not go to the stadium, stayed home and  had their own pre game festivities.

Kick off started at 6:40 PM.  By 11:30 AM traffic around the stadium was gridlocked. Cars sat on Darien Street for hours only to advance  half a block. Most would get to sit and tailgate for four to five hours.   Everyone wanted to get there early. The weather was great. Police reported six arrests. 2 for disorderly conduct,  1 assault on State Police at 1000 Pattison Ave and 3 for selling bogus tickets.  Police did not have any info on arrests at Frankford and Cottman or Broad Street. 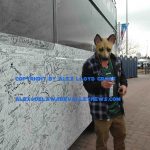 When a  street celebration takes place, people will burn the jersey of the opposing team. They will also shoot off fireworks and fight. That’s was par for the course at Broad Street locations after the game.  Smaller crowds will walk, converge with a larger on and soon, you have a mob to deal with. Most celebrations lasted about two hours. At Cottman and Frankford Aves,  police stood by and let people do what they wanted to do, as long as no one was getting hurt. Open container laws were not enforced.  About two hours after the game, the police helicopter circled the crowd, put a spotlight on it . 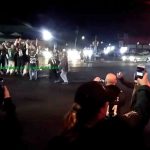 The crowd was waving and some gave the police helicopter a one finger salute.  That was the helicopter saying goodbye and giving the officers a signal to l to disburse the crowd.. About 60 cops with bicycles pushed the crowd away from the area, and secured it, as the streets department used trucks to sweep up broken glass. In other areas, like 5 points in Levittown, several thousands people converged in the streets. This location is popular in Lower Bucks County. There is a shopping center  with ample parking for several hundred cars,  and there are a multitude of businesses there that are closed, which also have large parking lots.  Plus there is a strip club on the corner and a sports bar within walking distance.. A perfect location to have a party.  This is a precursor to what will happen in two weeks as the Eagles win the Super Bowl.