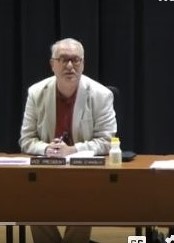 School Board Vice President John D’Angelo said he was pleased to announce an eight consecutive year a school district budget will be approved without raising taxes on residents.

“Just so the public will know,. Sometimes you do a budget and you cut things out. I know Chris and Dr Shaffer and the budget committee has worked hard. And we really haven’t cut things out. What we’ve done is we’ve right sized. We’ve looked at outr enrollment and class size. This isn’t cutting stuff for the sake of not raising taxes,” said D’Angelo.

District officials said the last time taxes were raised was in 2009  and this years fiscal budget is about about 400 k more than the previous year.

School Board Director David J. Chichilitti added the budget has increased by about 3 million dollars since  2015  without taxes being raised on residents.

In related business the school board  passed a resolution to levy real estate taxes at a rate of a little more than $15 was passed per $100 of assessment passed 8-0.

District officials encouraged new homeowners to apply for the Homestead rebate program estimating about 90 percent of homeowners in the borough currently receive a yearly payment of $200 to $400 yearly.

School Board Director Albert Pirollo was absent from the meeting.