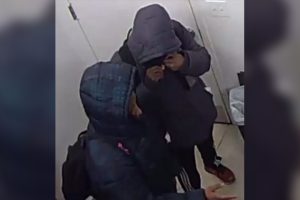 Philadelphia Police are looking for two black males that  did not do a good job of concealing their faces when they robbed the At&T store at Franklin Mills.  The theft happened on January 27 2020 and the video which is here was just released to the media today, February 13 2020.

Once inside the store, they gained access to the rear office area of the store and forced the employees to give them multiple iPhones that were stores in a cabinet.  The cabinet was closed and they made the employees open it. While the photo that accompanies this article may not show their faces clearly, there are parts of the video that does. The suspects then escaped through the mall.  While the name of the mall is technically called Philadelphia Mills, it is never called that by many people. They refer to it by it’s original name, Franklin Mills.