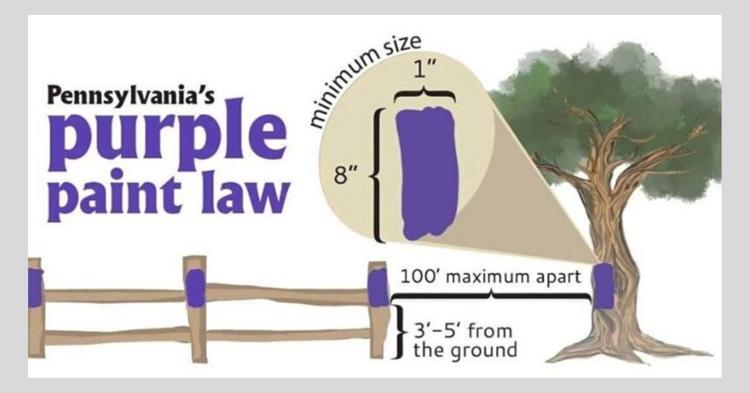 Within the next few months, you should start seeing purple striping around properties in Pennsylvania.  This means No Trespassing.  House Bill 1772  which was signed into law by Governor Tom Wolf  is now in effect. Pennsylvania now joins Texas, Kansas, Arizona, Montana, Idaho, Florida, Maine, Indiana, North Carolina, Missouri, and Illinois. in having this law. Nevada law is similar but orange is the color there.

You can still post signs but lawmakers found that at times those signs were damaged or ripped down.  Now, a trespasser is guilty of a crime simply  if he or she enters or remains in any place where notice against trespassing is given by actual communication, lawful posting or fencing. While this is used in places where a person owns a huge parcel of land to discourage hunting, the purple paint is valid for single family dwellings, townhouses or even apartments.

This is not only used to dissuade hunters, but salespeople,  Children who may want to play on land, and especially it is to be used against any kind of person, mentally deranged or not, that may have a beef with someone. They enter onto the property, by walking past the posted purple paint , that is the intent right there. No lawyer can get them off. Ignorance of the ;law and the fact that the accused did not see it is not a valid defense. You are guilty.  Penalties are enhanced.

This law in valid across the state except in Philadelphia and Allegheny Counties.   The paint , in vertical lines must be at least eight inches long and one inch wide.  The lines must be not less than three feet nor more than five feet from the ground.  Hunters should know they might encounter purple markings on trees and that these marks are meant to define the boundary of an adjoining private property that’s posted against trespassing.

An unarmed hunter may enter private land that is posted, to retrieve a hunting dog.  Defiant Trespass is a criminal offense. you can be fined up to $2500 on your first offense. It is a misdemeanor.