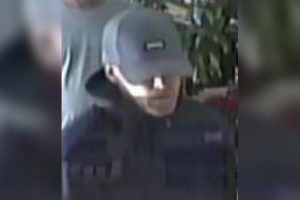 Philadelphia Police and the FBI are looking for the male in the above photo. If you know who he is, call them at (215) 418-4000.  While he should have been isolating, he was out robbing banks. He held up the Citizens Bank at 2497 Aramingo Avenue in. Philadelphia. He  allegedly passed a demand note to a bank teller and escaped with an unknown amount of cash.