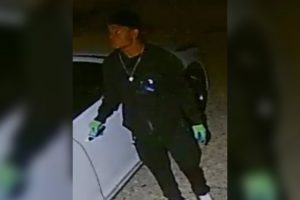 Police in the Delaware Valley want to find the male in the above photo.  He is wanted for an attack that is almost to gruesome to print.  On May 17 2020, at 5:30 AM he was in the vicinity of the 7400 block of Brockton Road, in west Philadelphia.

He was caught on security camera trying to get into vehicles that may have been unlocked. He tired of that and managed to get access to a basement apartment on the 7400 block of Brockton Road.  Once inside, he found two females inside.  He shot one in the abdomen, leaving her fighting for her life. The other he raped, before running away, in an unknown direction.

A video exists below, that shows a person of interest that police want to speak with.