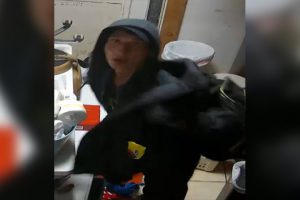 Stores  at malls get renovated all the time. With the coronavirus shut down, , most construction stopped.  Crime, has not stopped.  This male in the photo and video broke into what was once the Viva store at 187 Franklin Mills Circle and stole power tools, nail polish and an i-pad.  He ran away in an unknown direction.

While he should have been home under quarantine, this rocket scientist was out committing a burglary.  However, he was not wearing any mask, because, well you will have to ask him why he elected not to conceal his identity.  He could have but he did not. Now someone will know who he is. He’s probably local to the area.  While he was caught on camera, the date and time are wrong. After all, the place is under construction, and the security system while working was not calibrated for the correct date and time.  The thief tool nail polish but left countless rolls of toilet paper, according to the video.