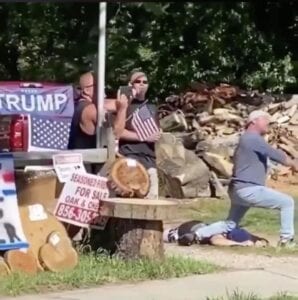 As the nation comes together to heal , two males in Franklinville NJ thought it would be a great idea to hold a counter protest to a march when Black Lives Matter came  to where the men were, two of them imitated the way George Floyd died.  by kneeling on another mans neck.  All this with TRUMP 2020 flags prominently displayed in the background.

The men were videotaped.  To be clear, they have every right to protest. They could have turned their backs, or held signs. But they didn’t.  As the video is going viral,  it has been revealed that one of them is a corrections officers in NJ. He got himself suspended without pay. “We have been made aware that one of our officers from Bayside State Prison participated in the filming of a hateful and disappointing video that mocked the killing of George Floyd. The individual has been suspended from their post and banned from NJDOC facilities pending a thorough and expedited investigation.” the NJDOC said in a statement. He was identified as Joseph DeMarco.

The other used to work for Federal Express.  The key word is USED to. “The behavior depicted in the video, which involved a FedEx employee, is appalling and offensive. The employee in question was immediately removed from all FedEx work duties while our investigation is concluded and all internal procedures are followed. A diverse and inclusive workforce is at the heart of our business, and we stand with those who support justice and equality, FedEx holds its team members to a high standard of personal conduct, and we do not tolerate the kind of appalling and offensive behavior depicted in this video. The individual involved is no longer employed by FedEx. We stand with those who support justice and equality.”

You can see the video

I found another video from one of the people James was with. Listen to what they say at the end it’s absolutely disgraceful and disgusting. pic.twitter.com/ec1KKe7ne4