A good lawyer will stop at nothing to defend a client. Including questioning validity of evidence . If that does not work, the next step is to question how the evidence was obtained. That is exactly what left wing activists are encouraging the legal team, led by Paul Hednecker  that represent Lore Elizabeth Blumenthal are hoping to accomplish.

Blumental, a massage therapist from Jenkintown was caught on photo and video allegedly setting two police cruisers on fire.  She was wearing a face mask, which did not help her.  Amateur photographers and fellow protesters took photos and videos. They uploaded them to various social media sites, where anyone can see and take them for free. Including federal investigators.  That is exactly what they did.

They watched as vandals spray painted the car and smashed windows. They then watched as an unknown female wearing a distinctive shirt grabbed a flaming piece of barricade and set two police cars on fire.  All of it free, put on the internet ..  A T shirt that said “Keep the Immigrants, Deport Racists gave her away. It could only be ordered by EtSY. finding that out would take a few minutes. 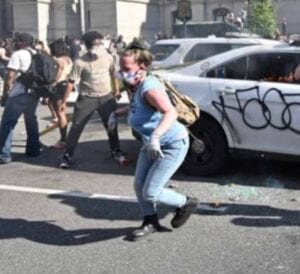 Blumental got excellent service from the store and left a great review. 5-stars.  She signed the name Alleycatlore. A Google search led them to another social media page and that got her LinkedIn page. From there,  a subpoena was served on Etsy and showed that she ordered the shirt and it was delivered a few days before the protests.  It seems like it would take a few minutes to do that but it actually took days.  All of the information Blumenthal

shared was shared by her publicly.

It was some very good detective sleuthing.  Had the same tactics been used to catch a child molester, no one would bat an eye.  Hetznecker is trying to say that his client is a victim of the case being “political”, by charging his client in federal court. She could face charges in state court as well.  In interviews he called it “profiling people,”. Had his client not put all her information on social media all by herself, she would not have been caught.

Then there was her distinctive tattoo.  That ink was caught on multiple video cameras  allegedly setting the  police car on fire.  Her social media pages show her arms, which show the same tattoo. Of course, no one thinks they are going to go out and set police cars on fire, or commit serious crimes. If they do, and their social media pages are public,  they have only themselves to blame.

Had Blumenthal covered her tattoos, covered her face completely and worn generic clothing with a plain hat,  she would have made the work of the police very difficult.