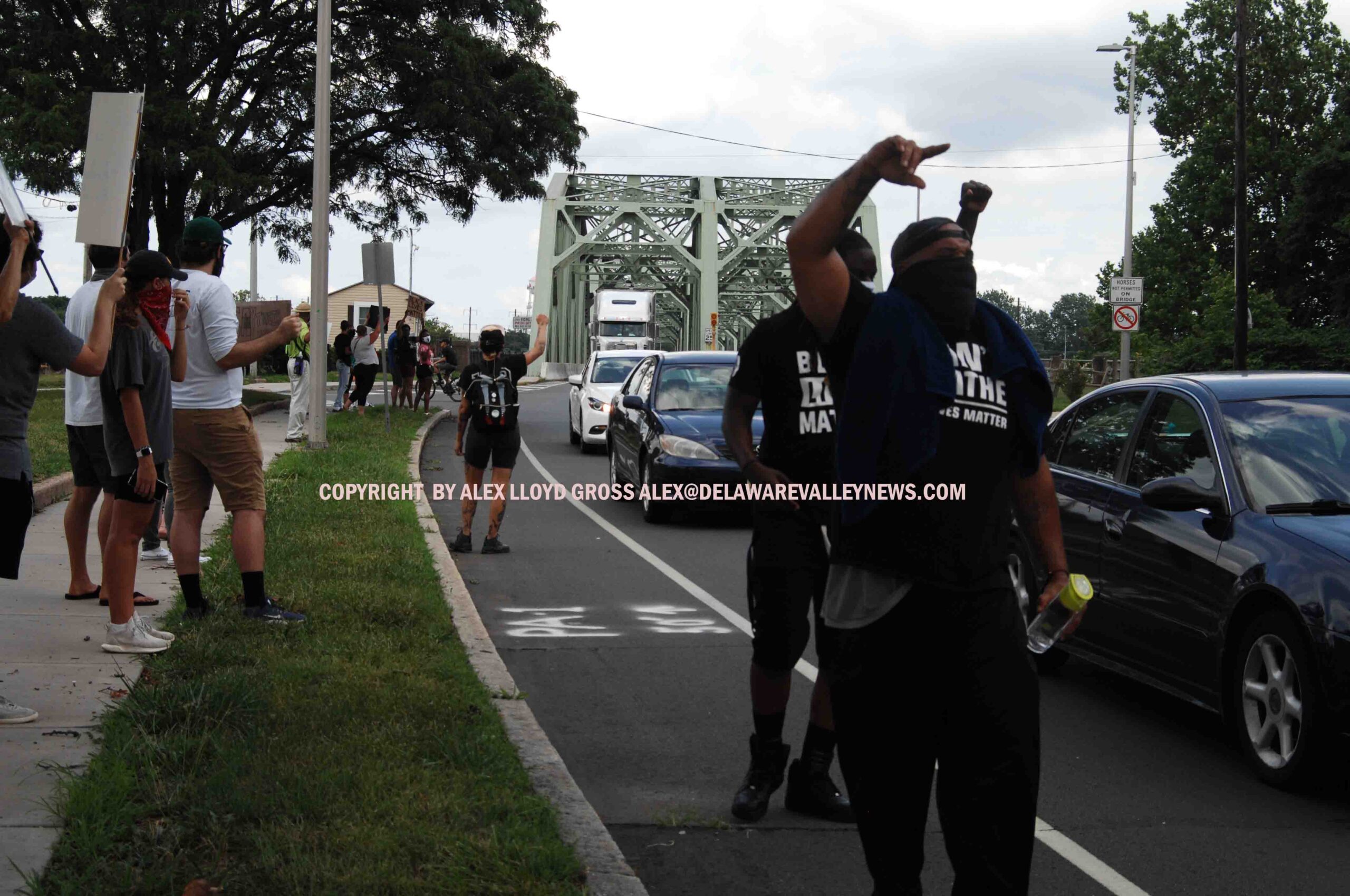 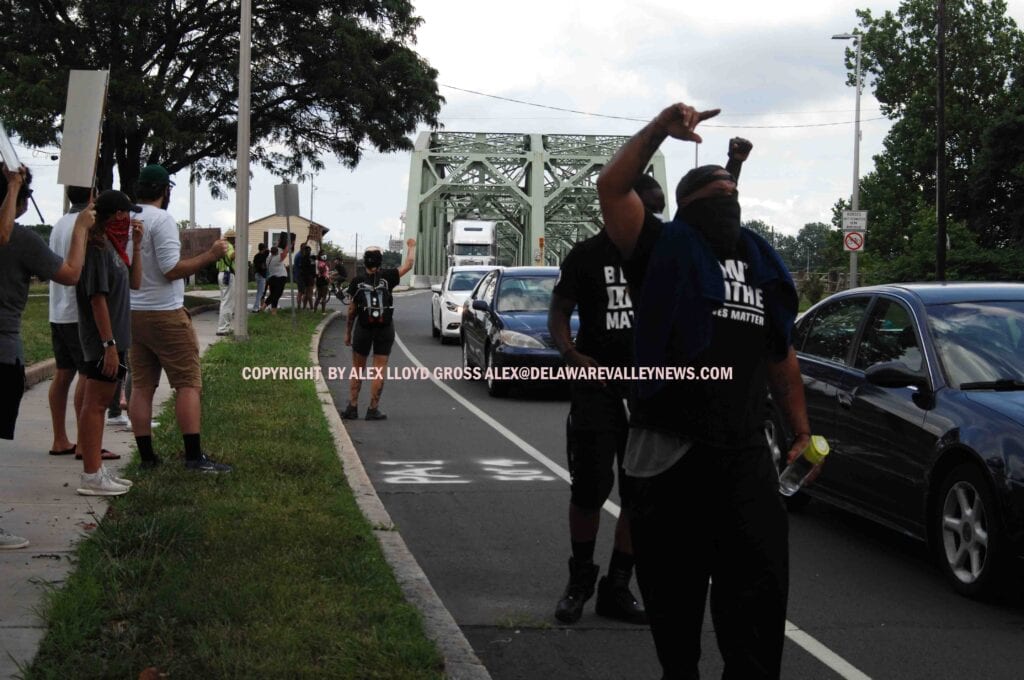 The message was against hate and bigotry.  It has no place anywhere.   Today, July 11 2020, about 300 people came to   rally at Williamson Park in Morrisville to  show support for Black Lives Matter. This was a peaceful demonstration and there were no fights , looting or  violence of any kind.  The group formed up at the small stage and from there, they walked along the grass to nearby Bridge Street. Once there, they held up signs and chanted “Black Lives Matter”.  When a motorist would honk their car horn, they would cheer and chant a bit louder.

They did not close any streets.  People coming over the free bridge from Trenton were unimpeded. The group knows that by shutting down a street, people  who may be sympathetic to you can turn against you, when you make them late.  This group stayed at Bridge Street for about 30 minutes.  As always, the focus of people attending a BLM rally is to bring attention to racism.  Comments made by Desean Jackson  and Stephen Jackson against Jews were discussed and denounced. “You cannot have one group disparage another, ” that  was the sentiment of many people in attendance.   This protest was supported by the Bucks County Chapter of the NAACP. 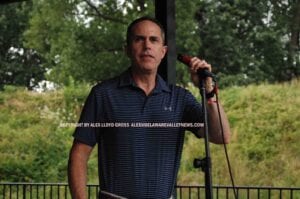 Different people came and some had other agendas. Defunding the Police was one of them. State Sen Steve Santaserio was there and he said “I would like to see funding go to social programs but to disband the police, no, that is not something I can support”.  A small group of counter protesters showed up. Pastor Aiden.  led a very small but vocal group to disparage those in attendance.  With a microphone, he called those who were at the rally “Sinners, faggots and lesbians. Black lives don’t matter, they only matter every four years at election time,” he said.  The group ignored him. This street preacher has a reputation for preaching hate and has made appearances at high profile events such as the Eagles Superbowl Parade. 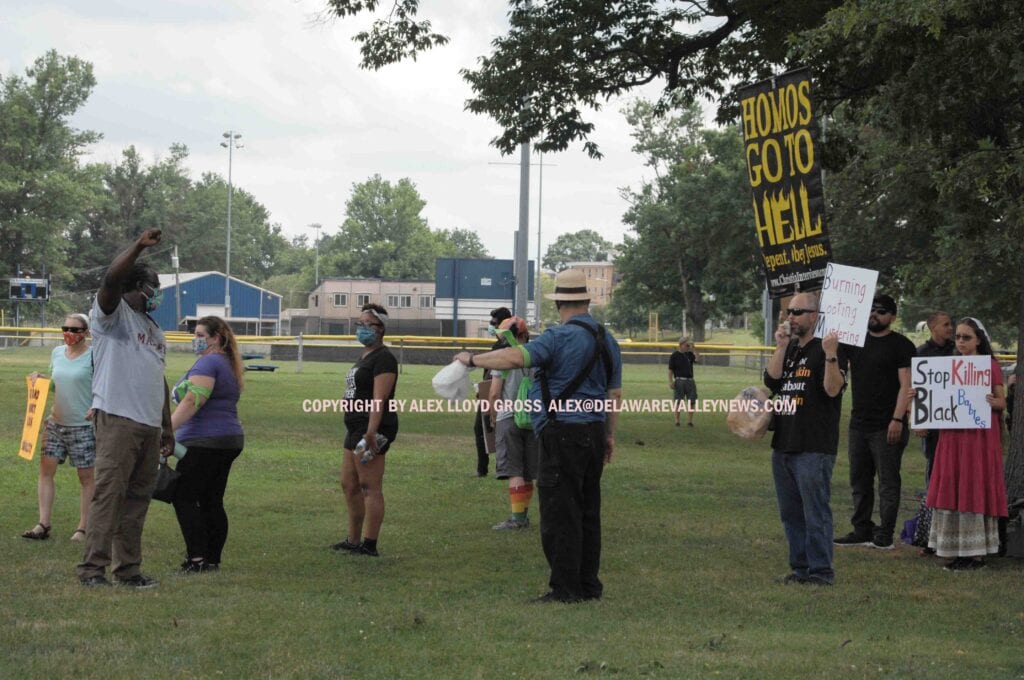 Internet rumors swirled that the protesters would take down the Robert Morris statue. He is the founding father of Morrisville. Truth be told, the marchers had zero interest in the statue and less interest in getting into a confrontation with anyone that thought they were there to tear it down.. Still, armed patriots gathered around the statue to insure  nothing would happen. Nothing did as The protesters stayed away from the statue and concentrated on listening to their speakers.  Since Morrisville is right over the bridge from New Jersey, some of the people that showed up were from Trenton.