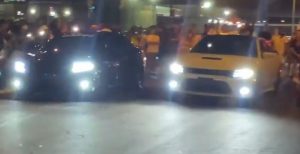 Just  after midnight, two Dodge Chargers , one white and one black,  raced north on 3rd Street. For a few seconds it was a close race, when all of a sudden, police said the white Charger SRT lost control and swerved east, smashing into two parked cars who’s owners there there to watch the illegal street race. Three black males jumped out of the white Charger and fled on foot.. The other vehicle fled north on 3rd Street and never returned to the accident scene.

The female spectator was rushed to University of Penn Hospital, where her right leg will be amputated.  A white , unmarked tow truck came and quickly towed the other charger before police could arrive. The race and crash was caught on video. If you know who the vehicles belong to, police want to hear from you. Also, if you know who was driving the tow truck, police want to hear from you as well.

It is illegal to watch drag racing, Spectators can be fined. The other  driver is equally responsible, even if it  never made contact with the crowd, or other car, police said.  You can watch the video below.