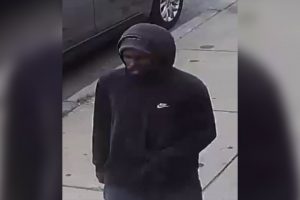 On August 31 2020, a female was walking alone on the 8000 block of Craig Street. This was in broad daylight, at about 4:00 PM. A black male, 20 years old  wearing a dark sweatsuit is also on that block. He approaches the victim and tried to rape her.  He was not successful in that endeavor, but he did steal her cell phone. He was ;last observed walking north on Craig Street towards Welsh Road.

As usual, this male was observed on security camera footage in the area. Take a look, see if you know him.  You can see the video below. He was wearing a dark colored sweat suit with a Nike emblem on it.