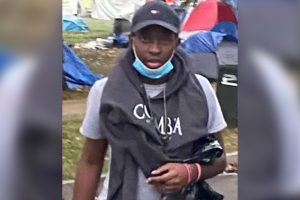 Do you remember the Philadelphia  homeless encampment,  aka the No Cop Zone at 22nd and Ben Franklin Parkway?  This group wanted to make their own rules and live without any police.  In fact, they had signs all around their compound saying police were not welcome.  Their brazen ignorance and lawlessness   was well document by this and other media. There were stabbings and multiple drug overdoses as well as assaults.

One such assault is the beating of a 72 year old male by a young “tough guy” who looks right into a cell phone without bothering to pull up his mask. He  allegedly assaulted the male  by kicking him and throwing him to the ground. Two  other “tough guys”  had to prove their fighting skills against the senior citizen, and joined in the assault, police said.

This incident took place on October 15, 2020 at 6:38 M. Philadelphia Police said. The male pictured is wanted for the assault. If you know who or where this male is, police want to hear from you. The homeless encampment has been dismantled.  This male probably thinks he got away with it.