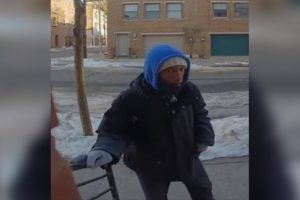 Stealing anything is stupid. Stealing packages is a special kind of stupid. Inside a boxed marked for someone else is a mystery item. It’s usually not  consumer electronics. More often it is clothing that will not fit anyone in a thief’s household , adult diapers or  parts to fix something. That does not stop people from taking what is clearly not theirs. One thief is South Philadelphia was so tempted to get his hands on a package he could see thorough a door, he broke the door to steal it.

It was all caught on video. The hapless thief is not wearing a mask. He sees the package and starts trying to act nonchalant He sticks out like a sore thumb. He is right outside the building, caught on camera and then he forces the door open to steal the item.  It is no longer a package theft. It is burglary.This happened on the 1500 block of South Street on February 6 2021. He is on foot so he is probably local. police would like to make his acquaintance.  If you know him perhaps you could help make that possible.