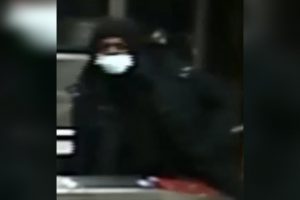 Police want to find the male in the video in this article. He is accused of entering a ladies restroom in Macy’s, at 13th and Market Streets. He then rapes a female who was in the restroom. This happened on February 21, 2021. He is wearing an inexpensive mask incorrectly and made his escape via the westbound subway.  He disembarked the train at 52nd Street just before noon.

He is wearing shoes that are black but have white around the sole. He might have tried to get new shoes. If you see someone that fits his description and is wearing new footwear, police would like to speak with him.