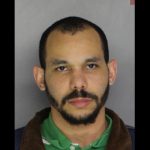 A bizarre and strange robbery took place early today, January 14, 2022 at the Sunoco station on Street Road. As the clerk was working, a male came in, wearing vanilla scented trash bags and forced the clerk into a rest room as he helped himself to Newport cigarettes and some cash.

The male escaped on foot , running towards Philmont . Avenue. That was the last place he was seen. However police know who he is, just not where he is. His name is Jonathan Nelson and he being sought by  Lower Southampton Police.He was also wearing an olive green winter coat in addition to trash bags over his shoes. If you know someone that appears to love smoking Newport cigarettes and all of a sudden seems to have a large amount of them call 215 357 1235