In something rarely observed, The National Weather Service on Monday posted four separate alerts for the area in wake of the incoming storm.

Forecasters explained the incoming storm, at the time, as a combination of a “strong cold front” moving into the area following the recent heat wave, combining to create the mighty and intense storm.

The Nottingham Fire Company responded to ‘wires down call” on Century Lane in what looks to be a small fire. 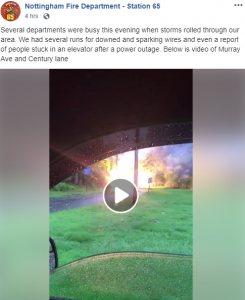 Tullytown Police informed locals they could come to borough hall to for “relief” from the heat or to recharge cell phones, if experiencing a power outage. .

As of 1:25 a.m. PECO  was reporting approximately 430 active outages with about 38 thousand customers affected.

As of 1 30 a.m. no major injuries have been reported in the area.

Updates as they become available.

Publishers Note: In the original version of this story the date of the storm was incorrectly stated as Tuesday, the story has been updated to fix the error.