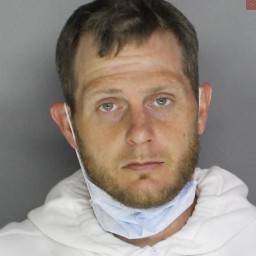 Dennis Gilbert of White Haven Pa, ( Luzurne County) was arrested by Lower Southampton Police  when he could not explain drug paraphernalia  that was handing out of his  pockets. He was walking along Bustleton Pike with his eyes closed.  That and the fact it was 11:00 PM was enough for someone to call police. As they arrived,  he was found to have paraphernalia in plain view.police said.

When he was searched,  police  located narcotics which he was arrested for . He was released to his girlfriend who lives locally. Lower Southampton Police said the incident happened April 3, 2020. He was wearing a surgical mask at the time of his arrest.