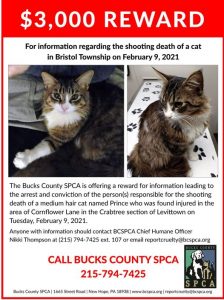 It takes a special kind of evil to intentionally kill an animal, especially when you know there is a good chance it is someones pet.  Yet on February 9,2021, some asshole thought it would be fun to shoot a cat. Prince, a medium haired cat in the Crabtree section of Bristol Township was shot and killed. A reward of $3000 has been offered and that number will  go up, when animal lovers put their money behind it. Currently, the Bucks County SPCA is offering that reward on it’s own.

The cat was found on Cornflower Lane.  People that use animals as target practice are going to go to state prison for the gun crime of five years, plus the animal cruelty charge. Prisoners in state prison do not like animals abusers and child molesters. That means the person(s) responsible for shooting the cat named Prince, can expect at least half a decade in prison  looking over their shoulder.

You can make that happen. If you know anything about this you are urged to call (215)794-7425.   Many psychiatrists will tell you that those who take pleasure in hurting or killing animals stand a good chance of escalating that behavior to humans. Many animal abusers have become serial killers  The family of Price would appreciate if you know anything to make that call. In addition to serving prison the person(s) responsible will also be given metal health treatment to find out what caused this behavior and put a stop to it.