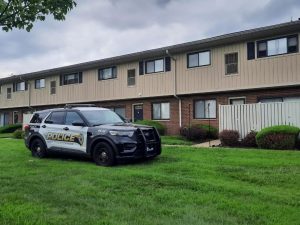 A domestic argument was taking place at the Racquet Club Apartments off of busy Veterans Highway  during the early afternoon of August 18 2021.  Things got so heated, police said, that a woman who was being beaten or threatened sought help from a neighbor.  She was banging on the door , asking for help, when  the victim  opened the door and tried to calm  things down.   He was promptly shot in the face for his efforts. He is stable and is expected to survive, police said.

The assailant then got into a vehicle and fled the scene. Police spotted that vehicle and chased it throughout lower Bucks County.  The driver failed to stop and , in fact increased speed even more.. He led police on a chase into Philadelphia , where city units joined in, as the car made it’s way down the Roosevelt Blvd.  When the suspect got to Whittaker Avenue, he then  stopped his car, got out with a gun and started to fire at police, while he was running around and got to a Sunoco gas station.

He started to run around the building , firing  indiscriminately while people were pumping gas.  When he was cornered by police, his raised his gun at them and was shot once by a Philadelphia Police Officer and once from a Bucks County Officer . The suspect was pronounced dead at 2:30 PM. at the scene by medics.

Traffic was diverted from the Roosevelt Boulevard in the vicinity of Adams Ave.  That  resulted in a major traffic backup well into the northeast.