Graham Nash, accompanied by guitarist Shane Fontayne and Todd Caldwell on keyboards, appears on stage a few minutes past 7 pm. just as the sun begins to set on the horizon. “What a lovely late-afternoon [vista],” Nash says, staring out at the Atlantic Ocean. “I used to live across there.”

Nash opens his show with “three familiar hits from his Crosby, Stills and Nash and Hollies days:  “Wasted on the Way,” followed by “Bus Stop,” dedicated to Allan Clarke,  whom he shares a 74-year friendship with. “I’ve known him since I was six years old,” says Nash, of his former Hollies bandmate from 1962. After  changing guitars, he plays “Marrakesh Express”

The Nash stage set-up adheres to the “less-is-best” principle of “Occum’s Razor.” There are about seven guitars and two sets of keyboards visible. A carpet and a fan. There are no spotlights. The stage is illuminated by the warm tungsten tint of overhead white lights. The background drapes are illuminated by red, blue and magenta LEDs visible when it’s dark outside.

Nash is a simple man with profound thoughts. His songs are endearing as well as enduring. “Teach Your Children,” and “Our House,” are generational anthems,  emanating from simple observations of a young child holding a toy hand grenade in Central Park and the peacefully placing flowers  in the vase.

“Immigration Man,” “Field Worker,” and “Chicago,” are just as relevant today as they were 50 years ago when he first wrote them. Nash’s songs are simply constructed and frequently the first songs fledgling guitarists learned how to play.

“I am 80 years old. I need to make sure I make it to 90,” says Nash, who then gives a shoutout to a legendary local rock and roll impresario seated in the audience. “I am dedicating the entire show to Larry Magid who is one of the best promoters in the world.” Nash’s two-hour set is filled with tributes and stories dedicated to influential colleagues throughout his career, and his feelings about the world.

Pointing to a blue and yellow pin on his shirt, Nash says, “I’m wearing this badge in honor of all the people who died in  the Ukraine war at the hands of Putin. Nash segues into “Military Madness.”

Above all, it’s the music for Nash as he submits to complimenting David Crosby, whom he doesn’t see eye to eye with these days. “Ah, eh, well, OK.” Crosby calls,  inviting him for a day of sailing on his schooner “The Mayan.” Nash accepts.  “The trip turned into a “9-week journey from Fort Lauderdale to San Francisco,” and the inspiration for the whale song.

The Beatles, whom Nash has known since their earliest days at the Cavern, are honored with an interpretation of “A Day in the Life,” followed by a sing-a-long of Stephen Stills’ “Love the One Your With.” 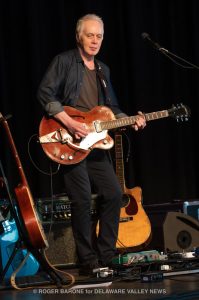 “I’m English,  I’m old enough to remember World War II,” and his homeland being bombed by the Nazis. “We made it through that. We’ll make it through again,” says Nash, offering a message of hope for today’s continuing conflict.

Neil Young’s “Country Girl” from the “Déjà vu” album is the wildcard surprise of the evening. Although Nash and guitarist Shane Fontayne’s arrangements are wonderful, the missing harmonies of Crosby, Stills, Nash and Young are impossible to ignore. All of them legends in their own right, who’ve made incredible music together. You wonder, what would Young’s career be like without Crosby, Stills and Nash?

Would an acoustic version of “OHIO” be the Kent State historic musical eulogy without Stills’ electric guitar, Crosby’s chanting and Nash’s harmony above it all? Would it have even been created without Crosby’s copy of the “Life Magazine” cover featuring the dead body of Jeffrey Miller lying on the ground at Kent State?

Nash works the streets like a veteran reporter , stalking the streets, observing with intense curiosity the lives and objects around him. He interacts with people, talks to them and is generously approachable. A trait that he attributes to a chance meeting with the Everly Brothers during his youth.

Nash’s approach to photography is antithetical to his songwriting. Where simplicity gives way to unusual juxtapositions of everyday life. His photos are not touristy. He disdains  the scenic, opting instead for organized convolution and abstract qualities of irony.

As the show winds down, Nash pays tribute to Joni Mitchell “Our House,” followed by “Chicago.”

The performers return for a two-song encore, featuring a tribute to Buddy Holly  “Everyday” and a sing-a-long during “Teach Your Children.”

David Crosby and Stephen Stills are no longer touring. Neil Young has

postponed his tour until the spring of 2023. This Nash show in Ocean City could possibly be the last performance by any members of C S N or Y. in our area.

Jim Sahol, 69, said after the show, “It brought back a lot of memories, lots of good songs. I saw all them individually, but never together. It was the second time that 72-year-old Fred Levin, has seen Nash in the past few years. 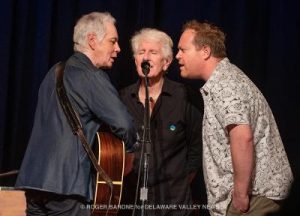 The Marquee outside the Ocean City Music Pier said “GRAHAM NASH 7 PM” as the youthful energy of vacationing students and families strolled along the boardwalk, oblivious to the historic musician, singer-song writer and political activist performing a mere hundred feet away.

NOTES: Nash’s tour will resume in Tacoma, Washington on September 29.  and he will play three consecutive nights in Park City, Utah on October 27, 28 and 29.