Almost right out of the gate, Washington looked like they would be a formidable opponent to the Ryan Raiders. Two long passes caught by receivers and a touchdown was scored.  Six to nothing with Washington in the lead. They tried a conversion in lieu of an extra point and came up short. They still had six points on the board. 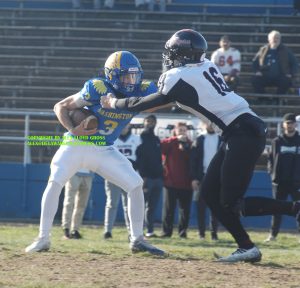 Those were the only points they would score.  Within minutes Ryan would score. They went to the extra point and were successful.  While the game was not a blow out, Washington would not score again.  Ryan would go on to win 17-6.

The game was broadcast live on WIP .  The stands were only about a quarter of the way filled for each team.  Concessions were limited to pretzels and chips. This was due to lack of help running the food tents.