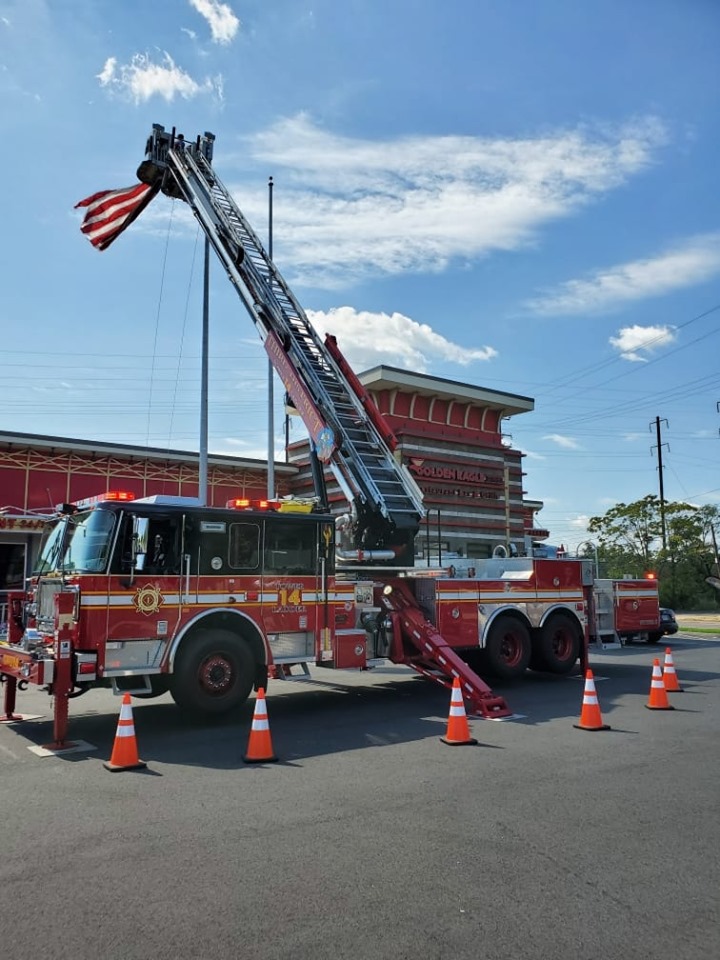 Editor’s Note: An earlier version of this story was published with the incorrect story title.

A local controversy of sorts on social media was solved last week when a Bristol Borough Councilman and a Bristol Township Fire Company volunteered to solve what was described as a “disgrace.”

On July 30 a social media post included the image of the American Flag in front of the Golden Eagle Diner was posted showing it torn and tattered. 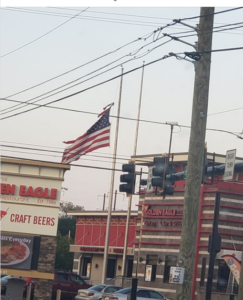 The post led to over 100 comments and exchanges, some of which were based only on opinions and perceptions and baseless deductions, but little in terms of facts as to why the flag was in such poor condition.

Multiple said the flag was in such tattered state due to recent thunderstorm activity in the Lower Bucks area. Thunderstorms with powerful winds had ripped through the area almost weekly this summer.  As a result, the flag rope lanyard pulled off the pulley and became wedged in the housing on the flag pole.

Diner management made several attempts to free up the flag so they could take it down and replace “Old Glory,” but were unsuccessful in that effort and required a way to reach the top of the poll.

Bristol Borough Councilman Tony Riccio (West Ward)  read and responded to several of the comments on the post.

The former Bristol Borough Deputy Fire Chief reached out to the management of the Eagle Diner and then the fire company he’s currently affiliated with, Bristol Township’s Third District Fire Company.

The original plan was to take the flag off the pole Wednesday night at 6 p.m. but yet again, the area was hit with a severe thunderstorm 15 minutes prior to the scheduled removal of the tattered red, white, and blue.

“We can’t do it tonight. Ladders and lighting don’t mix well” Riccio said via text.

Friday morning around 10:30 a.m. Riccio and Fire Fighters from Third District with Tower 14  arrived at the popular Bristol diner and removed the ripped and torn flag from the pole.

, “We took the top of the poll of, fixed and replaced it,” Riccio said explaining the process.

After the flag was removed, Riccio said we had a local business owner who’s contributed to the Bristol community for years and he needed help with something. And we were able to help them. And as a Veteran I just felt we needed to help them out in any way we could.

“Really, the key to this was Third District’s willingness to do this with no strings attached” Riccio said.

Presently the two flag poles in front of the Eagle Diner stand naked.

Management of the diner have placed an order for a new flag and a date for installing it has yet to be set as of press time.