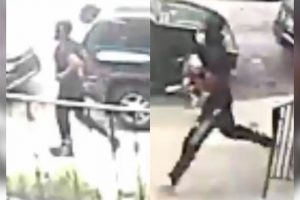 Philadelphia Police  are looking for two males that robbed a mail carrier  last week in the city.  The point of gun robbery happened on the 3800 block of N. Snydenham Street.  As the mail carrier was doing his job, two black males approached him. One of the males had a semi automatic handgun and told the mail carrier to “Give It Up Old Man”.  The mailman then gave him his mail pouch and the two thieves ran south on Snydenham Street, with the mail.

Robbing or assaulting a mail carrier is a federal offense. It carries a mandatory prison sentence, in a federal lock up. This is in addition to state time.  Look at the video, see if you know who these males are. No shots were fired and no one was injured.  The stolen mail was not recovered.