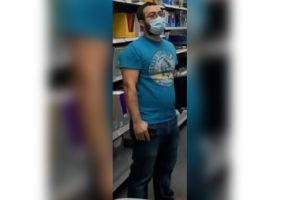 Philadelphia Police want to speak with  the man in the below video.  He saw a teenage girl shopping at the Wal-Mart at Philadelphia Mills, (Formerly Franklin Mills).  Rather than leave her alone, which is what he should have done, he positioned himself next to het and  put his phone at a low angle, hoping to get a snapshot of  under her skirt.

When the perv was caught doing it, he  did not stick around. He ran out the door, an into a Silver Honda sedan. Not before people who saw what happened  took a photo of him.  Those photos are also in the video below.  The male will be charged with inappropriate contact with a minor. If you know who he is, Philadelphia Police want  to hear from you.