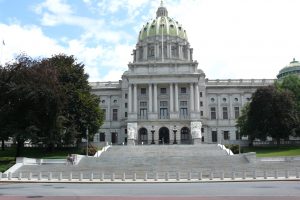 House Republicans are proud of themselves.  They passed their budget of $34.9 Billion  and did in on the backs of  the states most vulnerable population. The working poor and the unemployed.   The budget passed with the elimination of the General Assistance Program.  This money, given to people that need it the most. It is for food,  children’s toys, and was a lifeline. This cash meant the difference between keeping the rent paid and being evicted or missing meals. The vote to take it away was basically along party lines with all of the local republicans, like Frank Farry and Tom Murt, Martina White voting to eliminate this.

The other item that leaves the rest of the country laughing at Pennsylvania is the absolute refusal to raise the state minimum wage of $7.25 by even a penny. “We do not agree with Governor Wolf’s proposal of $15.00 per hour or even $12,00/hr, and it’s not on the table,” said John O’Brein  spokesperson for Rep Stan Saylor. House Republicans take money for reelection from  lobby groups to insure a vote on this issue never comes up. These lobby groups represent business interests like chambers of commerce .

This budget will put $250 million into the states “Rainy Day Fund”  and includes more money for libraries and rape centers.  It also includes $160 more in basic education funding.

While House Democrats  supported those items, they were furious that the minimum wage issue has not been addressed.  “We are not going anywhere, if they think we’re giving up, they are dead wrong,” wrote John Meyerson, on his social media accounts.  Due to inaction of legislators to do anything more than lip service on this issue, look for protests and demonstrations to ramp up in the fall.  Meyerson is a local activist and proponent for raising the minimum wage.

“There is a huge disconnect between Bryan Cutler and Stan Saylor and the working poor. They have no idea what it is like for people, they think they are safe in their jobs. They are not,” Meyerson saId earlier this year.  Art Haywood, a Democrat Senator from  Philadelphia and Montgomery County held a press conference to denounce the elimination of the General Assistance Program.

The Senate will vote on this Thursday and take up the budget .