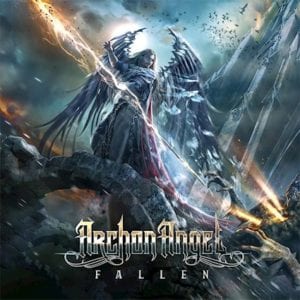 Do you like the band Savatage?  Ever wonder what happened to them?  Some members went on to play in Trans Siberian Orchestra.  Now, Zak Stevens took on a side project called Archon Angel and their debut record is called Fallen.  One of the key tracks on this is called “Return Of the Storm”. “It’s very oceanic”,Stevens said in an interview.  When asked if he thinks that the production can transport a listener away , he said” “Yeah, you’re right, it makes total sense and that’s the kind of stuff we also hear as the songs are being created. It gives us the inspiration,” he said.

“The record label got involved in choosing some of the stuff. I think they kind of wanted to do it because of maybe the story line. It'[s about following the Archon. It falls back to Greek mysticism . He’s kind of like the medium between the people of earth and the gods,” he said. At first the Archon did not want to be in his position but did anyway when he found out there was no choice.

“An Archon is a mystical figure. The one person that can take the message from the people of earth and relay it to the gods”, Stevens said. He hopes to be able to play shows with this band eventually. For right now, he was concentrating on making the album. “If you concentrate on wanting to go play shows, you don’t have a good album”, he said.

Zak Stevens wants to have fun with this project. It is a side project. He is not leaving TSO. “In fact we just had a third band form that will play the mid west . TSO is coming back in the winter, to the usual places. The put the schedule out in August.”. As for taking Archon Angel out on the road,  Stevens likes to play. “Arena shows are great but  i like it all, small theaters , clubs, it’s the reason I do it.  There are some places in Europe I’ve played where you pack it out at 150 and that’s considered a big success.

“This release has generated a lot of excitement. . The record company has been accelerating a lot of things. I am hoping we might be able to put together something by the end of summer,” he said, when asked about a tour.