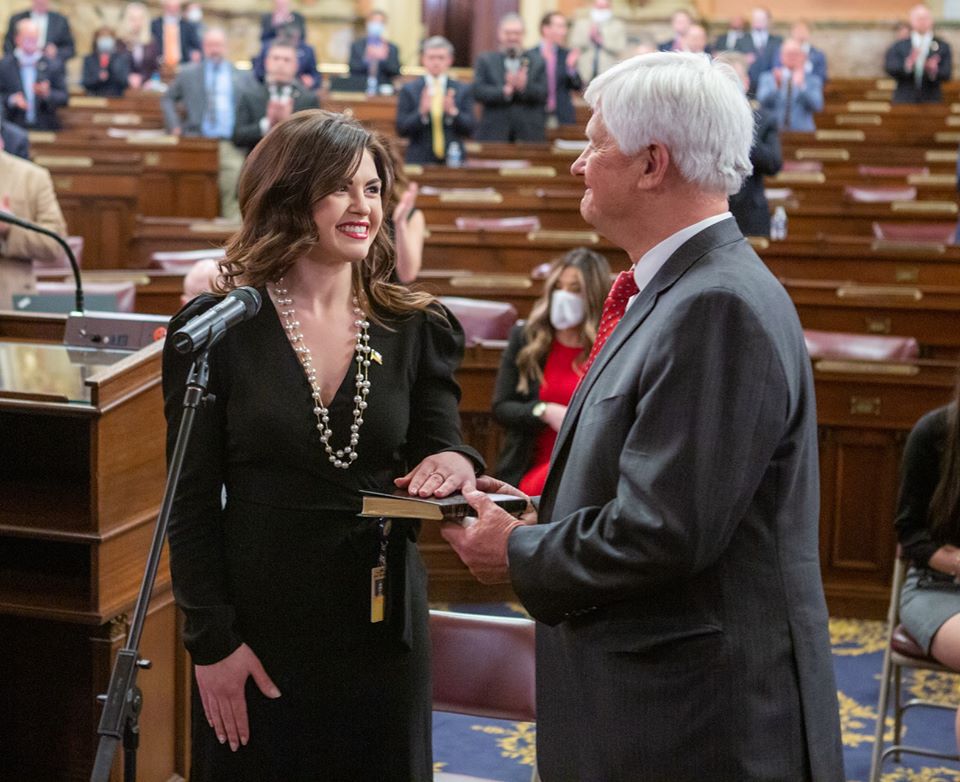 When a person wins an election for Pennsylvania State Representative, they expect constituents to visit their office and discuss matters like Real ID,  grants,  and maybe a claim for unemployment. After getting sworn in  at the state capitol in Harrisburg, KC Tomlinson (r) was thrown into the deep end of the pool. Even the most seasoned politicians could not be prepared for the deluge of pleas for help with unemployment, questions about face masks and available food banks. That is exactly what happened with the coronavirus causing the state to shut down. “I can tread water well, I have a lot of help and I have good staff,” she said during a brief telephone interview.

Her predecessor Gene DiGiralamo left the house due to partisan politics. He found it difficult to get things done across the aisle. “When I got here everyone was nice, I’ve only been here a week so it’s not fair for me to comment about that, but I am here to help Pennsylvanians, that is why I took this job,” she said.  The job of a state rep is difficult. Her views on things do not exactly square with speaker of the House Mike Turzai.  She wants to raise the state minimum wage. Turzai is not interested in touching that.  Had the wage been raised previously,  the most vulnerable workers would have a bit of savings to fall back on. It will be interesting to see if she can make headway in the house on that issue.

She was involved in a controversial vote to reopen the state slowly. “This is not fair that a big corporation like Wal-Mart or Lowes can come in and sell things,  and you have a small business that has one or two employees not allowed to open? That’s wrong. The governor’s waiver system was well intentioned but it was flawed. It was flawed when one business doing something gets to stay open and another with the exact same wording( in their waiver application)  is flawed,” she said. To be clear she is not talking about a movie theater  or concert hall to reopening  back to normal.  “There are ways to sell cars without having a ton of people in the business. Smaller shops,  that see a few customers a day can service those customers while practicing social distancing,” she said.  That is why she voted for the bill.  Not to have everyone go to a ball game, but for a bicycle mechanic to be able to open a one or two man shop and go to work. Governor Wolf is expected to veto that bill.

Tomlinson is well aware of the dangers of Covid-19. “Poverty kills too. Not being able to provide for your family kills too,” she said when asked about getting the state back to work.  “We want to do this slowly, within the guidelines of the CDC we do not want to rush things ,” she said.

She was sworn in on the same bible that her father, (State Senator Robert (Tommy) Tomlinson used many years ago.She was sworn in in the middle of COVID-19 which is why some of the people in the photo are wearing masks. Being an elected official means being in Harrisburg to vote. “We know when votes get cast and when we argue pro or con, so this is not something that is sprung on us. We are told when to be there and I intend on being there for every vote that I can be,” Tomlinson said.  She was asked about winter driving,  If I have to drive five hours to cast a vote then that is what I am going to do.  Sleeping over in an office is not out of the question, it is something that others have done. Knowing bad weather is coming means one less vehicle on the road.

Tomlinson beat Harold Hayes in a special election in March. In November she must run again to keep her seat.  Probably, Hayes will challenge her again.  For right now, she is too busy trying to help people in her district. i am not focused on that, I want to focus on helping people “My telephone number is (215) 750-1017. I have two staff in my office that will help you, if we cannot get you the answer I can get you in touch with someone who can,” Tomlinson said.

She is not permitted to keep office hours on Saturday. She is permitted to keep working at her father’s  funeral home, which she said she intends to do.  One thing that will not change is her love for animals. I give money every month to local animal shelters. I have two dogs, Duke a Golden Retriever and Jemma, a rescue mix. Politicians have to come in contact with people. Shaking hands and hugging is a part of the landscape..”That has changed, it is weird for me.  I have been accustomed to handshakes and hugs. On election day I met people but no one really tried to shake my hand or anything, it is  going to take some getting used to. That is for any person running for any office, not just her.

KC Tomlinson  has been service as state rep for about two weeks.  Her indoctrination into this job is unique. Never before has a state rep taken office in the middle of a term via a special election when the state was closed due to a quarantine. She is doing what the CDC says and that means closing her office door and doing things via telephone, fax and computer.  It’s making her job harder. It is making her come up to speed very quickly.  “Unemployment seems to be the biggest concern. I want people to call me if they have questions or problems. We can intervene on their behalf, she said. Self employed sole proprietors will soon be eligible for benefits :”The state is busy building that website for them to file through, she said.