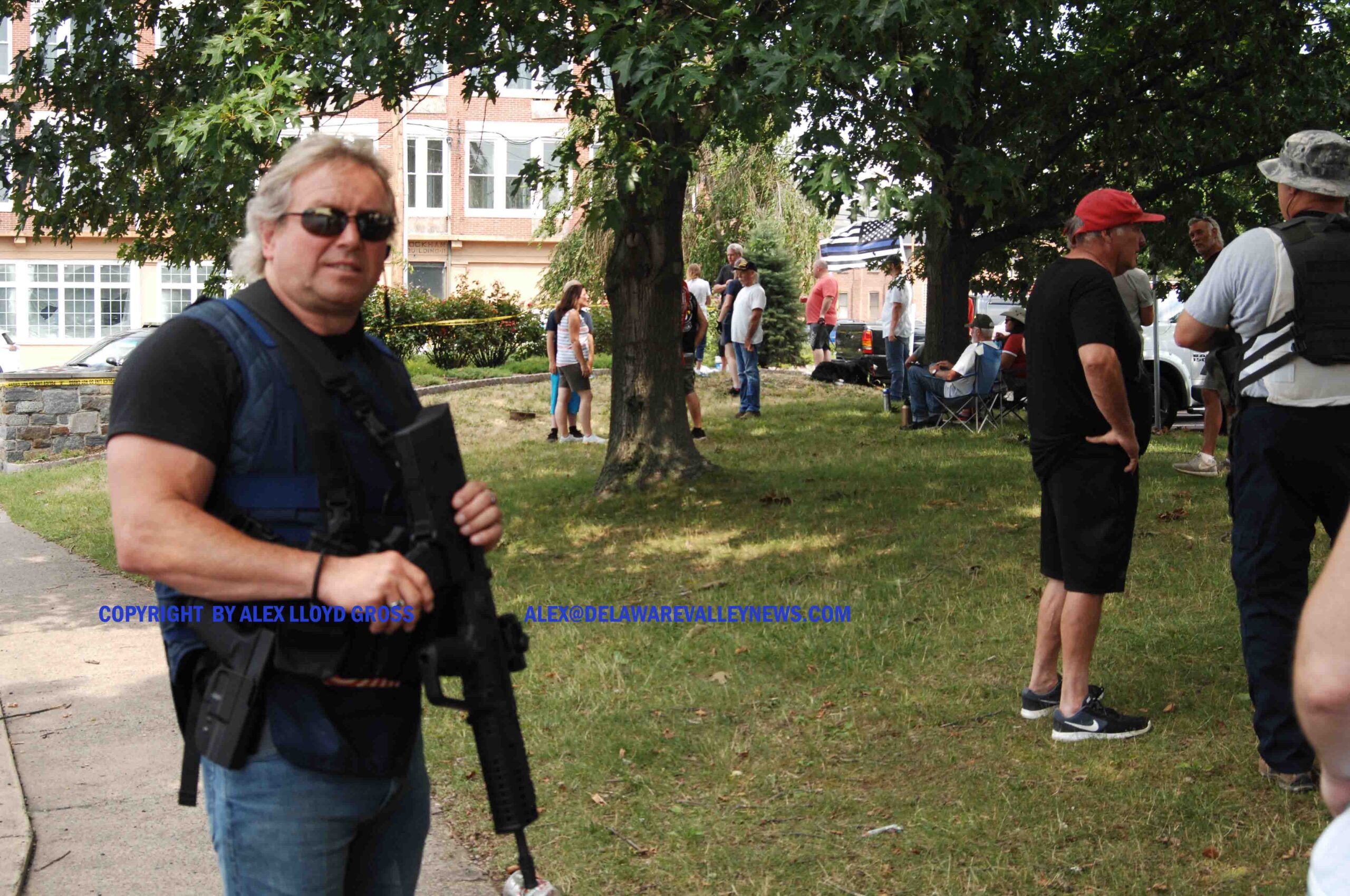 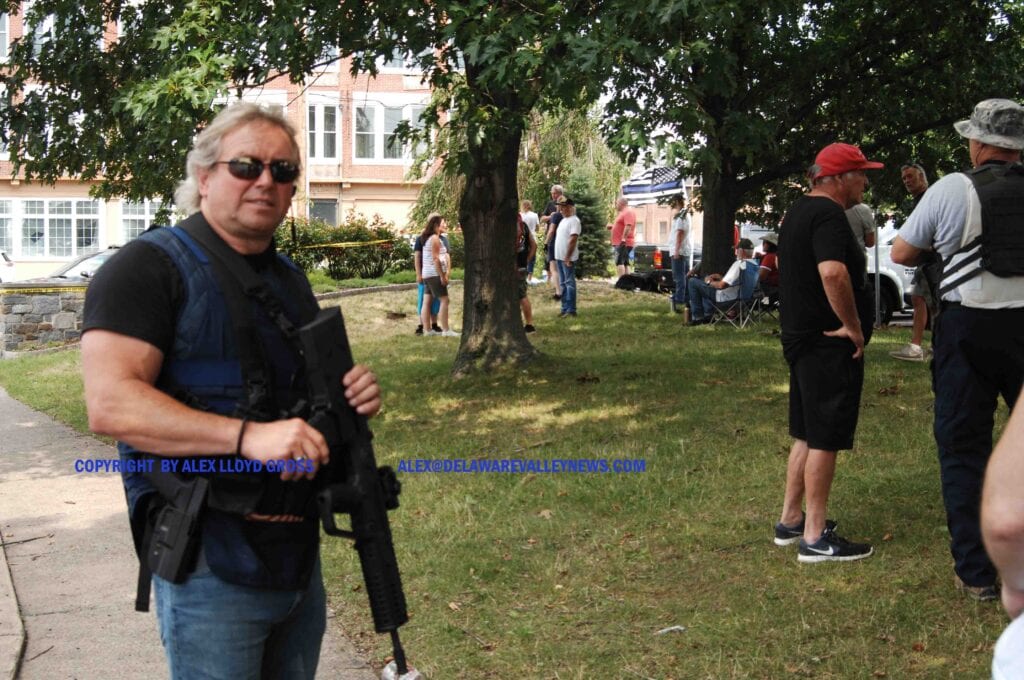 Alex Lloyd Gross photo-Delaware Valley News.com Chris, a heavily armed man is on the grounds of the statue. A Blue Line Flag can be seen in the distance,.

A Black Lives Matter rally was going to happen in Morrisville, yesterday, July 11 2020. Organizers promised it would be peaceful.  It was.  That did not sway about 50 to 70 civilians from standing about two block from where the protesters were gathered . These people were stood around the Robert Morris Statue to make certain that nothing would happen to it. Nothing did. Some of these people were armed.

At the BLM rally, organizers told people to be prepared to see armed people and people that did not share their views. They also publicly stated that going near the statue was not on their agenda for the day.  In light of recent events, that did not stop the second group from showing up at the statue just to make sure.  The statue was cordoned off with police tape and two Morrisville Police Officers were detailed to the statue. Robert Morris is considered the founder of Morrisville. 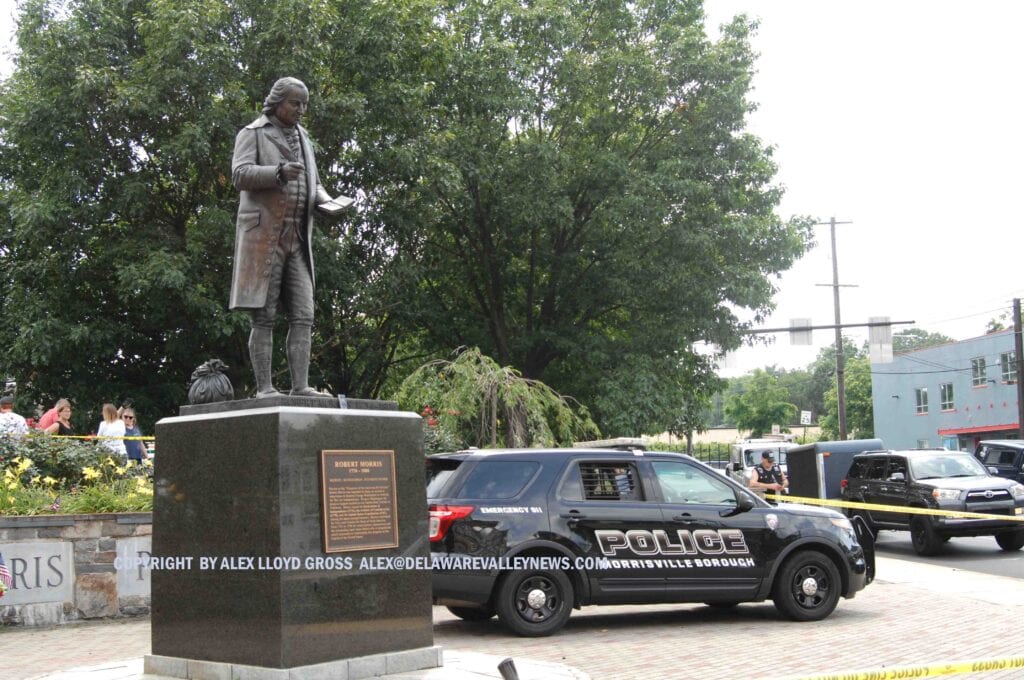 Pennsylvania is an open carry state.  You can carry an exposed pistol anywhere except Philadelphia and Pittsburgh. Long guns, like semi automatic rifles are legal to be carried anywhere in the state. It is the second amendment. That amendment was exercised as several people stood  by and basically did nothing. They listened to classic rock on a radio, they patronized a local business and did not entice or antagonize anyone who walked by. They were there as a presence. A threat of desecration of the statue was started by an internet rumor.

On May 30, 2020, a peaceful rally was supposed to take place in Philly. It did.  But several thousand lawbreakers vandalized buildings and turned their attention to statues, especially in the weeks after. No statue was safe. The protesters are uneducated and will tear down statues of people that fought to abolish slavery.. Christopher Columbus statues across the nation have been removed because of a small but vocal minority. “It’s funny, these clowns will tear down statues  and complain but they have no problem spending money with the same people’s face on it,” said a man who called himself Andrew , who was at this rally.

The tearing down of statues had progressed to this vocal minority calling  to have Mount Rushmore destroyed.. The group at the statue wore the American Flag and the Blue Line Flag. For those that do not know, this is a black and white rendition of the American Flag but it has one blue stripe. This is to remember fallen police officers. There is also a Red Line Flag for firefighters.  Some people are offended by both flags and also the American Flag. They claim it promotes oppression.

The group by the statue would be called American Patriots by some. Others would call them overzealous gun nuts. Either way, they were there, not bothering anyone and not oppressing anyone who wanted to join them or simply walk by.