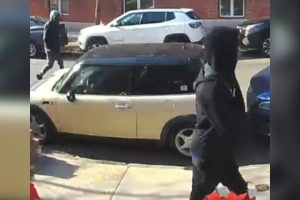 There has been an epidemic of carjackings in Philadelphia.   One 16 year old carjacker was shot and killed by a victim with a  legally owned firearm.  There are quite a few other carjackings that result in the victim getting the car.  Police recently released a video showing suspects wanted for an  armed carjacking that happened on January 6 2022.  The two walk down the street , one on either side, so she would be distracted by one or the other.

A woman had parked car on the 800 block of North 28th Street.at 1:00pm, the victim, a 40-year-old-female, was getting out of the vehicle, she was approached by  two unknown black males armed with handguns. Suspect #1 told the victim to get of the car while suspect #2 entered the passenger seat and climbed over into the driver’s seat. The Suspect #1 then took her cell phone and passcode. After giving the suspect the code, he got in the passenger seat. then drove off toward Parrish Street.