Two males are wanted by Philadelphia and Cheltenham Police  for a string of break ins and attempted break ins in the area near where Cheltenham Avenue divides Philly and Montgomery County.

The first break in was on January 24, at 4:00 AM. Three black males smashed out a side window and climbed inside a small business on the 6300 block of North Board Street. They made off with  the proceeds that were in the cash register. Also taken was four rolls of lottery tickets, cigars, and cigarettes. Surveillance video depicts the suspects using power tools to open the machines. Total estimated loss was approximately $21,000.

The second incident, happened on January 24,2022 in Cheltenham Twp. The unknown offender is a suspect in the burglary of the Elkins Park Auto works located at 8100 Old York Road, Cheltenham, Pa. on January 24, 2022. 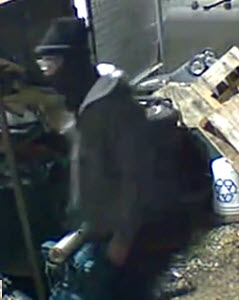 The third incident was an attempted break in of the Royal meat Market on the 1500 block of Wadsworth Ave.  There, a black male operating a blue pick-up truck tried to use a crow car to enter the rear of the store. When that did not work, he attached a tow cable from his truck to the door. The end result was a damaged door, no entry was gained. Security cameras did take his photo. 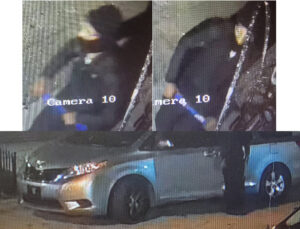 On January 28, 2022, at 4:00 AM the Cottman Mart located at 541 Cottman Avenue, Cheltenham, Pa. was burglarized. Just prior to the burglary a van matching the one pictured in the photo was captured on the store’s security video driving past and then behind the store. The electricity was then cut off to the store, which disabled the security system. Once the suspects gained entry a large amount of scratch off lottery tickets were taken from inside. The below depicted males, occupants of the below vehicle, were inside the store on January 23, 2022.

Cheltenham Police said that on February 4, 2022, at 11:40 PM, an unknown black male entered the foyer of the Santander Bank located at 8080 Old York Rd., Cheltenham, PA. using an ATM card and then used a key to gain entry into the bank. Once inside he attempted to force open a safe using a blue crowbar with negative results.

On March 2, 2021, an unknown black male was captured on video surveillance pulling into the rear loading dock area of Hmart grocery store located at 6201 N. Front Street driving in a black Mercedes-Benz. The suspect exits his vehicle and uses a large crowbar to break into the rear door of the store. A few minutes later the suspect then drives away in the same vehicle leaving the area without taking anything.

On March 2, 2022, at 2:45 AM, an unknown black male gained entry to the Front Street Deli located at 5501 N. Front Street by breaking the side door.  Once inside the and after a brief time the store alarm sounded causing the suspect to flee the building.