An  unidentified mummer associated with the Finnegan New Year Brigade has been suspended from the organization, after he was caught on  cell phone video making disparaging comments about homosexuals, during the  parade on January 1, 2015. The video, which went viral was shot by a bystander and uploaded to the internet.  The group he was marching with did a parody of Bruce Jenner/Caitlyn  Jenner . Jenner, who was featured on a box of Wheaties after winning the Olympics in 1978 is depicted on a fictional box of Fruit Loops by the organization, as a they made fun of the Vanity Fair magazine cover. 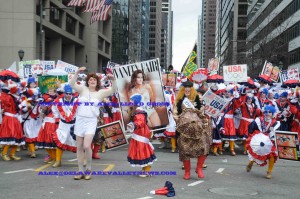 in another black eye to the mummers, a man who was walking a small dog in South Philadelphia, when a small group of mummers spotted him an assumed he was a homosexual, due to the dog’s size. As he tried to distance himself, the  mummers punched him in the face and fled into the crowd.  The man, John Holz refused to file a police report. It has not been confirmed if the coward that assaulted him was a member of Finnegan’s or not.

Incoming Mayor James Kenney called the performance “bad” and was offended.  Not everyone was offended by the performance.  Mummers have traditionally stepped up to the line and almost crossed it by  their parody of sensitive issues.  While the actual theme of Bruce Jenner may or may not have been offensive, the member’s comments were  and he was punished,  according to the groups Twitter account.

There  were minimal arrests at the 2016 parade, mostly for drinking and a few protesters that made threats to disrupt the parade. In this video made by journalist Roger Barone, you can see and hear how they had no agenda and just wanted to cause trouble.  The mummers parade went on as scheduled and the protesters failed to win any supporters and also failed to affect the parade in any way.