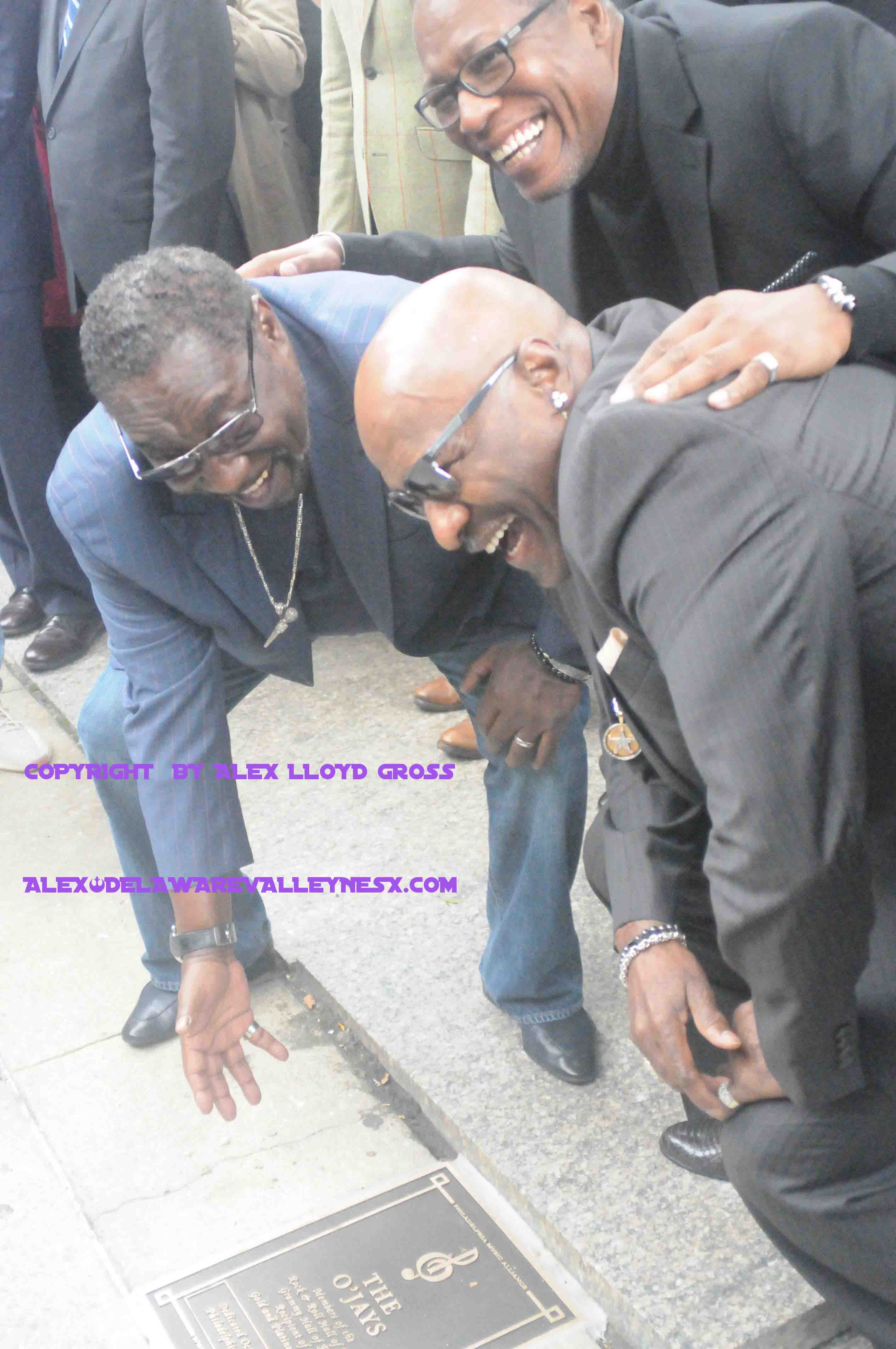 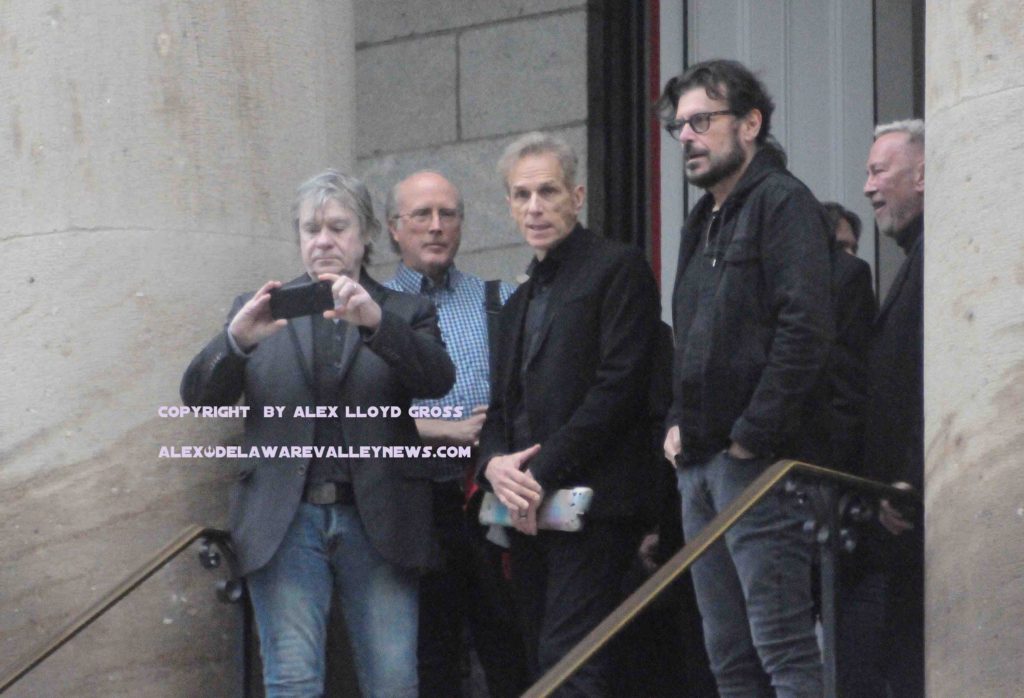 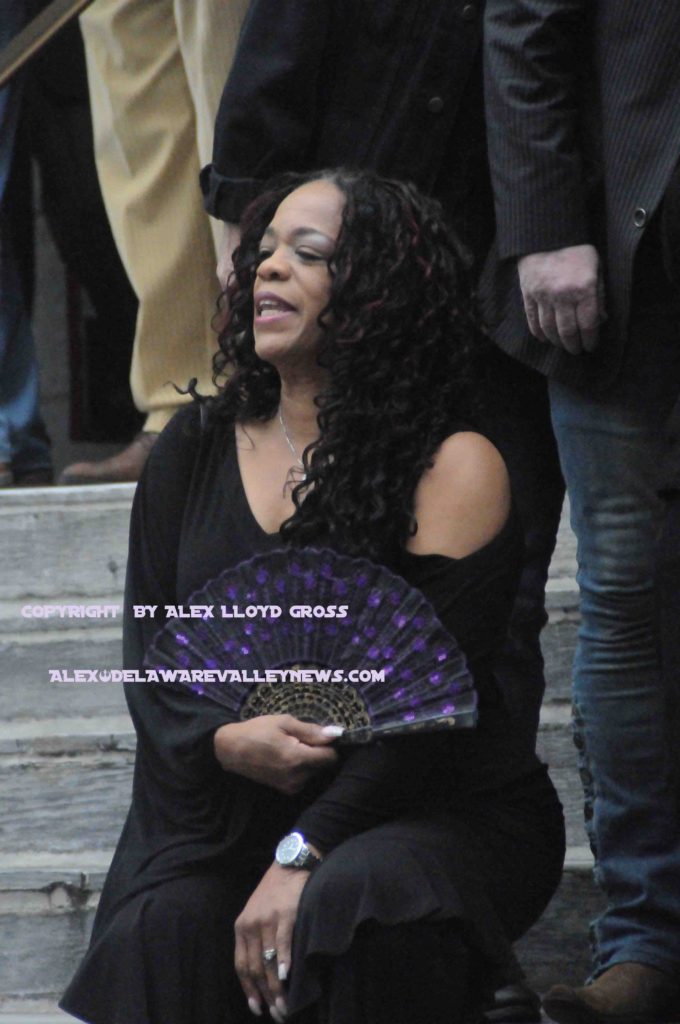 The Philadelphia Music Alliance unveiled plaques on the 300 block of South Broad Street.  There was a sense that something was going happen as passesby saw barricades and crowds gathering on Broad Street in front of Dorrance Hamilton Hall at the University Of the Arts . The arriving news media gave them a clue that this would be a happening spot, if they could only wait. Many did.  At high noon, notables such as The O’Jays  Evelyn “Champagne” King and Philadelphia’s own The Hooters would be present to get their plaques unveiled. 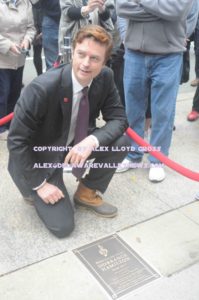 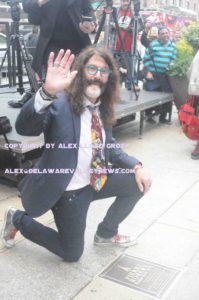 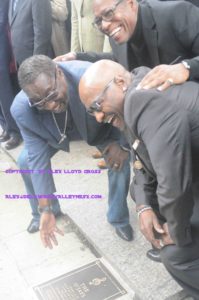 This year,  was a bit different. All of the performers were there. They did not send a representative.  Some, like King flew in from Southern California to be there.”I;m very much in shock.  My reaction was very very grateful. This is where is  started for me, in Philadelphia,” she said. King was a cleaning lady who was singing while she was working at Philadelphia International Records when   she was discovered.  42 years later, she is right back across the street from where it all started for her. “I had to be here, this is my name, I worked hard for my name. I was not going to not fly in to Philadelphia, my home to say thank you,” King said.

Others had to walk a few blocks  for their plaque. Like Mathias Tarnopolsky , President and CEO of the Philadelphia Orchestra.”We watched others get their plaques on Broad Street, now it’s our turn,” he said.  For most people, their first exposure to classical music is  through a movie score.  “Yes, when the music starts, you know something is going to happen,” Tarnopolsky said.   He can walk up and down Broad Street and hardly anyone would know who he is.

The O’jays and The Hooters were a different story.  Before and after the ceremony, people descended on them with records and tapes to get signed. As they would make their way up Broad Street,  fans would stop them on the street and grab selfies or talk about their favorite O’Jays tune. “For the Love of Money”, “Love Train” those songs made famous by Gamble and Huff who were there as well.

Lesser known recipients include Dorrance Hamilton.  A representative of the family was there, right next the the Hooters.  Jody Gerson, President of Universal Records.  “We look for talent and drive,” she said when asked about what she is looking for when she auditions new talent.

In spite of the fame all of the notables may have, locally, one inductee is more recognizable than all of them. Pierre Robert.  Disc Jockey for 93.3 WMMR. With his greeting of “Good Citizen” to those that call into his show, he is stopped on the streets every day, and at every concert he is at. After the ceremony, media got to speak with the inductees and fans were able to get autographs and selfies. All inductees were accommodating. There will be a gala tonight at the Grand Ballroom at the Belleview Hotel.  At this point, it is at capacity.