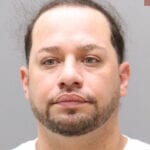 Angel Ramos, of Philadelphia is under arrested and charged by the Central Bucks Regional Police Dept. with forgery, and other charges. This crime spree started in September of 2019 and ran about one month, police said.

The victim lent his vehicle to another person.  That vehicle was not returned and it was reported stolen. It was also in a hit and run accident.  Inside the vehicle were the owners debit card and checks. Ramos is accused of making 17 unauthorized withdraw transactions on the victims ATM. and also two forged checks. The  amount of money was $6100 on  ATM cards and $2100 in checks.  Ramos turned himself in  when he found out a warrant was issued in his name.