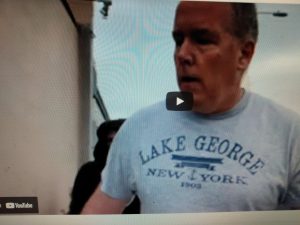 The video below is the unedited stream of the arrest and capture of Central Bucks Regional Police Department Corporal Clifford Horn in Atlantic City New Jersey.

A group called Colorado Ped Patrol allegedly snagged Horn when he chatted with them, thinking that he was going to meet a little boy for sex. When he got to the location where he arranged to meet the boy, he was met by a small group of concerned parents armed with cellphones, who were video taping.

Horn did not want to answer any questions and kept walking away from the group, as phones were put in his face.. He would turn and try to avoid the group who told him they are parents.   At one pint in the video, Horn says he is looking for a boat, when there is no boat in the area. He also called the situation “unbelievable”. As the group recorded him, one was on the phone with the police, trying to give them the location of where they  were.

Eventually, police show up, search Horn and take him into custody.

This group is based out of Colorado but travel the country to catch adults who solicit kids for sex. They put their exploits online for the world to see.  The below video is what happened during their encounter with Clifford Horn.  Some of the video is spotty and it has foul language.