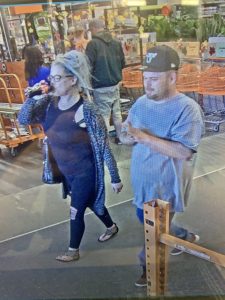 Shop Lifers Take Everyone’s Money. STEM. It was not a slogan, but it is operating reality for anyone that buys things in stores.  Halloween decorations have grown by leaps and bounds in the last 30 years. They used to be taped up cut outs or plastic items that were illuminated with a single light bulb.. They were a first pretty inexpensive, costing around $3.00. Now, these items cost several hundred dollars,  the illuminate the entire structure they are pointed at. Some are inflatable. They cost so much because some people steal them, which makes it more expensive for everyone else. .

Items are in high demand.  Falls Township Police are looking or a pair of thieves that allegedly stole  some high end Halloween items from the Home Dept store on October 2, 2021.  They pair entered the shop and did not pay for items they left with, police said.They were last seen leaving in a dark blue sedan.