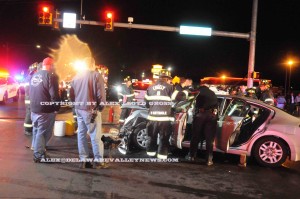 Two people were hurt,  one seriously, after Bristol Twp. Police said that one driver disregarded a traffic light and collided with another vehicle  at the intersection of Route 13 and Edgely Avenue. The crash happened just after 5:30 PM   and caused traffic to be diverted.  one driver was trapped in her vehicle for about 15 minutes, while firefighters  used hydraulic tools to free her.  The other driver received minor injuries, cops said.

The two vehicle collided in the southbound lane and one vehicle was pushed onto the sidewalk. Bystanders  stood by and watched the rescue.  Police said that charges are not likely to be filed.  Traffic was detoured around the scene for about one hour,  until tow trucks could remove the wrecked vehicles.