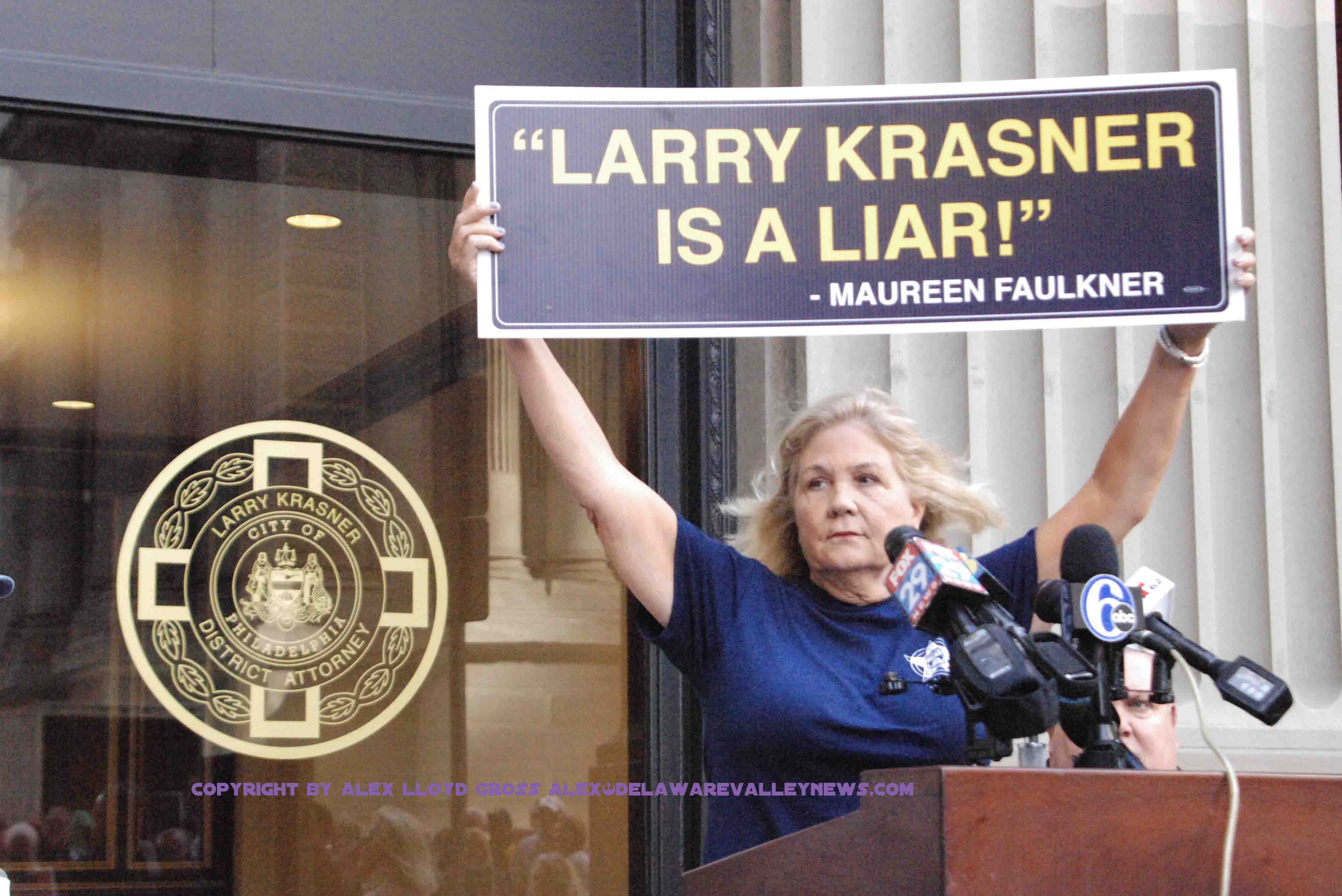 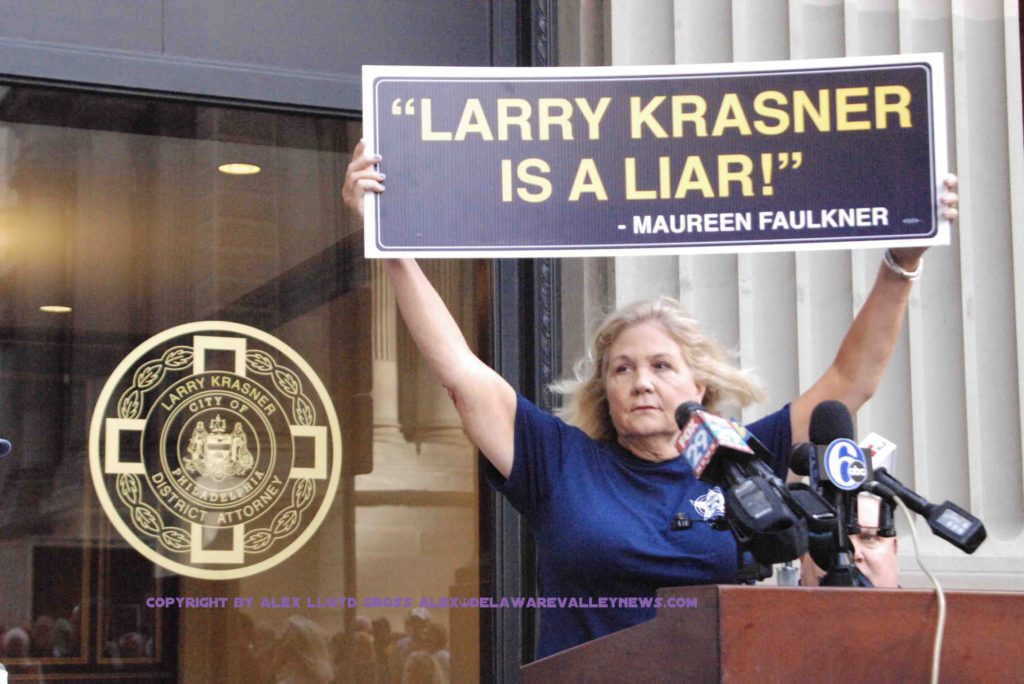 Three busloads of supporters of law enforcement and the Faulkner family got a police escort downtown today, October  4 2019 . The buses stopped outside the office of Philadelphia District Attorney Larry Krasner. It was there that a podium had been set up. About 250 people stood as Maureen Faulkner took the microphone and blasted Krasner for “ignoring evidence” and  “lying ” to her. At one point, she held up a sign calling Krasner a liar.

The event kicked off at Fraternal Order of Police headquarters  on Caroline Road. It was there, that local politicians like City Councilman  Al Taubenberger and State Rep Martina White stood alongside Maureen Faulkner.  They are fed up with the way Krasners office is handling this case. Maureen claimed that Krasner’s office gave her four minutes notice before making announcements crucial to this case. “I am going to do the same to him,” she said.

With that, those in attendance boarded three buses and started off an on trip to downtown Philadelphia, Once there,  FOP President John McNesby  gave the crowd a few minutes to assemble, and then escorted Mrs. Faulkner to the desk lobby to had the officer a personal letter for Mr. Krasner. Four minutes later, she was holding up a sign reading “Larry Krasner is a Liar.”. 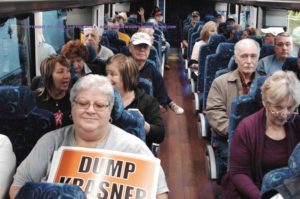 Alex Lloyd Gross- Photo- Delaware Valley News.com The scene on one of the buses going downtown.

Faulkner claimed that Krasner found six boxes of paperwork on the Mumia case and claimed there was nothing in it of any importance. The paperwork, Faulkner claimed enabled Krasner’s office to help Mumia in his bid for freedom. Mumia killed Philadelphia Police Officer Daniel Kaulkner on a cold night in December 1981, when Faulkner pulled over his brother for a traffic violation. Mumia was nearby and shot Faulkner. was so out of control at his trial that he was restrained and removed by the judge. He was convicted. After years and years of legal wrangling, he was given a new trial where he was convicted again. This time Mumia was well behaved in court.

There is legal wrangling over minutia in the case. This wrangling is being financed by liberal supporters of Mumia who will stop at nothing to try to get anyone to listen to them. Maureen Faulkner said that Michael Coard, a leading member of Krasner’s transition team is an ardent supporter of Mumia. Krasner has also employed others in his office that are supporters of Mumia and his case. 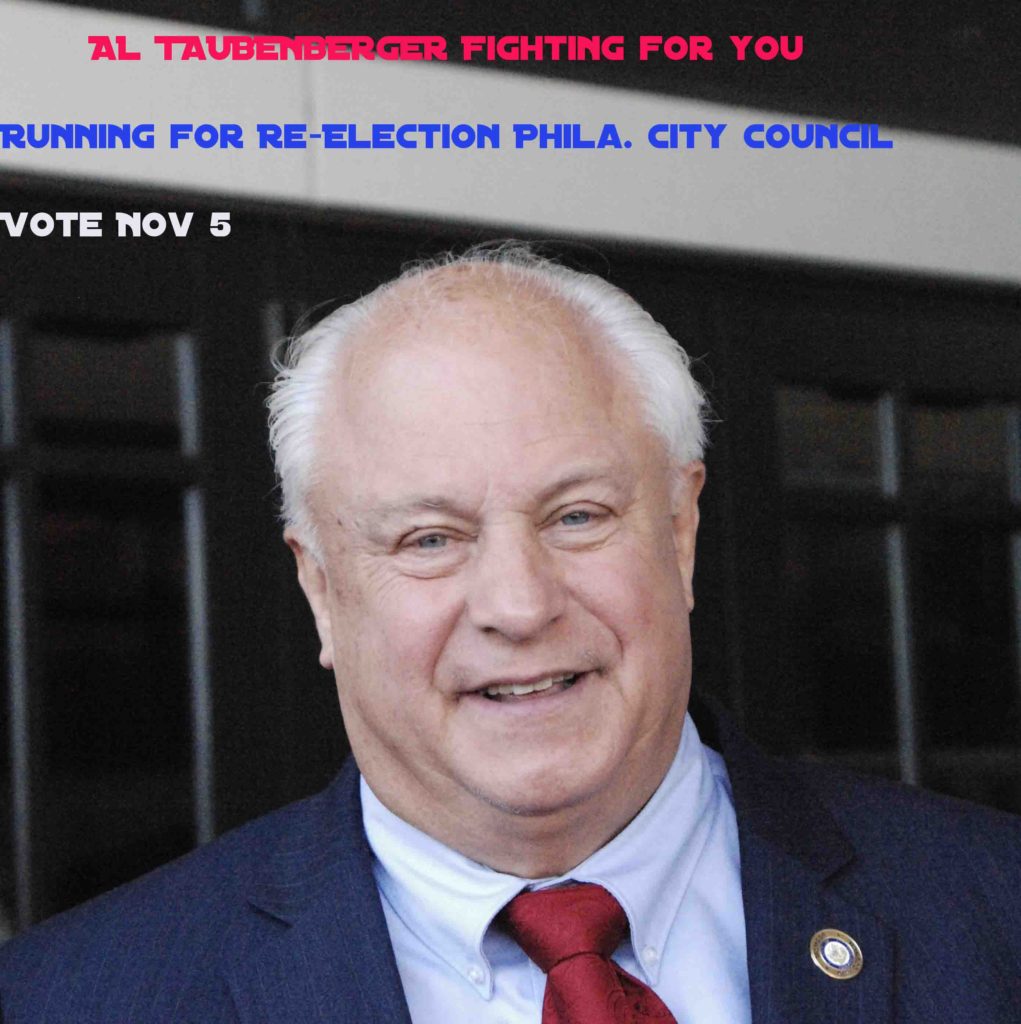 Maureen Faulkner is demanding that Krasner recuse himself and his office and give this case to the Attorney General to prosecute.  “If he does not step away,  we will go to court to have  him removed,” she said.  as the crowd of Faulkner supporters was assembling, one female observing this three floors below her in the District Attorney’s Office flipped the bird to the crowd below.

Delaware Valley News.com reached out to Larry Krasner’s office for a statement and did not hear back by press time.