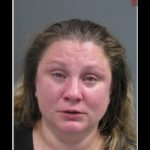 Police in Plumstead Borough arrested Jennifer Myers, 27 of Doylestown after a domestic incident  on June 22, 2021.  Officers were called to  the 5500 block of Winterbury Drive to answer a domestic disturbance call. When they arrived, the found Myers had gotten into an argument with her live-in boyfriend.  At one point, the boyfriend told police that she raised an 8-inch kitchen knife and lunged at him. He was able to retreat and suffered no injury. He immediately called police.

After speaking with  both parties involved, officers arrested Myers for aggravated assault and weapons offenses. More investigation found the assault was captured on video.  She was arraigned and remanded to the Bucks County Prison under $35,000 bail..