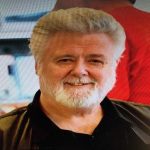 by Paul Big Bear
Dear Friends,
Here we go again “Sherman, set the way back machine.” When I was young the country was coming into the post war years, men were returning home to again take a job, women went back to being housewives, a family could own a home, a car, and eat well on a husband’s paycheck. Dinner was eaten as a family at the kitchen table and talking about your day was encouraged. After dinner homework (during the school year) then a bath and into your PJ’s, if you were lucky the family watched TV together. Mom and Dad would laugh at the Honeymooners, watch intently as Perry Mason unraveled this week’s mystery, and watched intently when Lloyd Bridges dove into the deep water full of mystery.

Sunday it was Walt Disney and when it was eventually broadcast in color we wished we could have a color T.V. I guess that was our desire to keep up with the Jones, whoever they were. Kids rode their bikes, played in the street, in the evening parents would sit out on their porches or gather in someone’s kitchen for coffee or tea. Newspapers were delivered, read, and discussed, life was simple and America was the greatest country in the world, look how many came to America for a better life every year, the promise of freedom, and a better life. What happened?

Suddenly prayer in school and God came under attack, the dollar didn’t go as far, putting food on the table was getting expensive, and suddenly families were splitting up. Soon television was all in color and if you didn’t have a color T.V. you weren’t accepted by those who did. No longer did we settle for three or four channels now we had seven or more (as long as we bought the little UHF box, whatever UHF was). The movies became risqué and magazines had to be hid behind the counters. Gambling was a way to maybe meet your monthly bills, Vegas was the place to go everyone dreamt about hitting it big in Vegas (so why did it become known as Lost Wages Nevada?)

Then one day the states introduced the lottery, pick the right three numbers and you could win a month’s wages for a buck, look at how many lottery possibilities there are. They took smoking out of buildings, restaurants, many public venues indoors and out but you can smoke medicinal or recreational marijuana at home. Thanks to cable we now have a thousand channel choices and we can watch porn in our living rooms and put a block on those channels (if you can’t figure out how ask your kids they probably know how). We no longer play in the street or gather on our porches. Suddenly we are told to stay home, social distance, wear a mask, wash our hands and use hand sanitizer because the Corona Virus is deadly. Soon it became COVID19 and we are told stay home as we receive stimulus money, in 1918 we had a virus that shut us down very much this way, wagons came down the street at night for the bodies of those who died.

There was no T.V., radio was a big deal, the newspaper stopped being delivered, few telephones so people spoke across the fence or porch to porch, Americans did what had to be done and came through, the virus was beat but it took six more years before a vaccine was possible. There was no division as Americans stood together. What happened, we stood together proudly, we had nothing really but we were unified. Today we can have anything we want or need delivered, health care can be handled on our pocket phone/computers. Are we going to be safe? Will this pandemic end? I wonder but right now I am binge watching.

Tags: everyone is entitled to my opinion=- tv without UFH