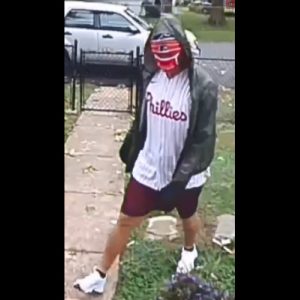 A Porch Pirate is a scumbag that steals packages from the porch of someone they do not know.  They are not entitled to the package or it’s contents. They are thieves.

On October 5, 2021 on the 1000 block of Baxter Avenue a male shows up in a U-haul van.  He gets out and very quickly removed five packages that do not belong to him. He scurries away because he knows that what he did was wrong.   He then drives away in an unknown direction.  This rocket scientist  stole packages from a house that has a decent security camera and you can see the footage below.

He is described as a white male, with a Phillies jersey under a grey hooded zip up sweatshirt, red shorts, a Flyers hat and a Phillies mask. He also was wearing gloves and appears to have tattoos on his left arm near his wrist. The fact that he has a van could be an indication that he is driving around , looking for packages to steal.  There is a growing trend  where people will box up cat turds, place them in a box with a shipping label on it.  The thief thinks they got the jackpot until they open the box.