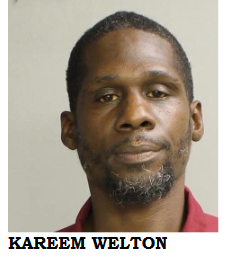 Kereem Welton will sit in the Montgomery County Prison, until his trial, which will happen in Montgomery County, for crimes that were allegedly committed in Philadelphia, last year. The narrative of the crime spree -plays out like a Grand Theft Auto game, only it was real life.  Police allege that on July 27, 2022 Welton tried to steal a bike from a public Safety Officer patrolling at Thomas Jefferson University Hospital. When that was unsuccessful he went to Branberry Terrace where he is accused of stealing a 2014 Chevy Malibu.

From there, authorities said that he stole a Maltese Poodle mix named Legend.  Just a short while later, Welton was on Broad Street when he became involved in an accident with the now  stolen car.  He did not stick around, instead, he drove south on 15th Street, on the sidewalk, hitting and killing Adriana Moreno–Sanchez. Before he abandoned the stolen car, he allegedly stole Sanchez’ chef’s jacket that she was wearing, as she was laying in the street.

He made it to Collegeville, Montgomery County, where he struck and serious injured a jogger. Untimatley, he was stopped by police and arrested.  Originally, he was charged with crimes in Montgomery County only. He was arraigned April 18, 2022 by Magisterial District Judge Jodi Lukens Griffis on the new charges of First–Degree Murder, Attempted Murder, Aggravated Assault, Robbery, Robbery of a Motor Vehicle, Attempted Robbery of a Motor Vehicle, Accidents Involving Death or Injury and related charges. A preliminary hearing is scheduled for 9 a.m., April 26, 2022 in front of Magisterial District Judge Cathleen Kelly Rebar.

“Because it was the same criminal episode, the Philadelphia District Attorney’s Officehas agreed to allow Montgomery County to charge and prosecute all of the criminal behavior committed by the defendant in its jurisdiction,” said DA  Kevin Steele. “This defendant’s behavior that night involved numerous crimes, from stealing a dog and stealing multiple cars to killing someone and robbing her of her chef’s coat, to intentionally targeting other individuals with his vehicle. Welton’s criminal behavior left many individuals and families traumatized and grieving. We will prosecute all of his crimes together to accurately portray the egregiousness of this crime spree