Two females are about to spend time in a cage,  They were caught on camera stealing a puppy, named Wendy from the SPCA on Sunday, May 8, 2022.  The two females go into the small dog area, see the puppy and then one of them, a bit more heavy set than the other, opens the kennel, takes the dog,  about 2:20 PM.  She walks with the dog, then her other friend uses her girth to try to block the camera from observing her friend  put the scared dog into a bag.

The two then leave,  On the video, you can see them laugh about it.  This is a crime. Someone knows who they are and will turn them in. Especially when a reward is announced.  Police are involved. The police will not be nice when they come knocking. The way this works,  officials say from past experience, is when they get solid info, police will knock on the door. If no answer in a few seconds, the door will be kicked in, and an arrest team will take the females into custody.

WATCH: Two women steal puppy from ⁦⁦@PSPCA⁩ HQ in Philly 2:19pm Puppy was already adopted by family who was waiting to pick up their new pet after spay surgery tomorrow. Cameras got good video of woman as they leave with puppy stuffed in purse ⁦@FOX29philly⁩ pic.twitter.com/P2CrAY2l3l

SPCA officials said that leniency can be expected if the dog is returned safe and quickly . Wendy, the dog was adopted by a family and was going to undergo spay surgery tomorrow. Her family is heartbroken.  The SPCA is worried about the safety of the dog. 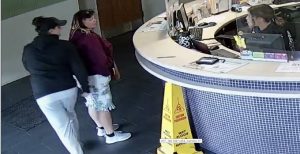 Anyone seeing these two is urged to call 911,